Much to Microsoft’s dismay, it looks like many of the next-gen Xbox specs have leaked over the past few weeks. One item that we have not heard much detail about, but will likely play big part in Microsoft’s future, is Kinect 2.0.

VGleaks, who has been dishing out details for both the PS4 and next gen Xbox, have posted up what are supposedly the specs of the device. Now, Kinect 2.0 is only a holding name at this point and some rumors have suggested that it will come bundled with the next Xbox. If you are curious about how Microsoft will improve upon the Kinect in the next generation, we have posted the specs of the device below, with the current Kinect on the left and the next-gen Xbox Kinect on the right. 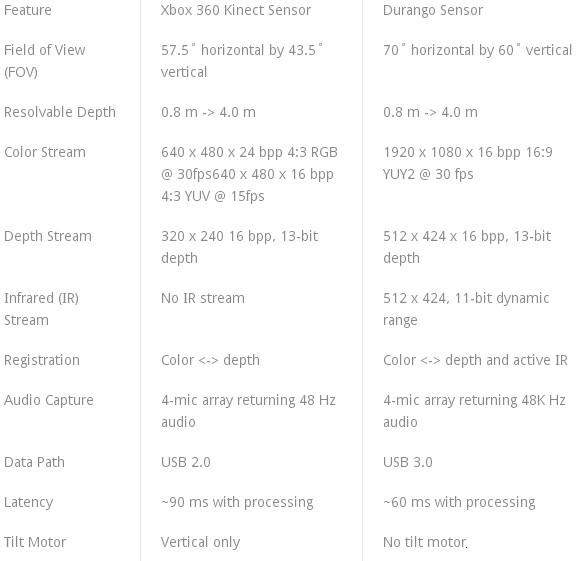 The image above gives a breakdown of the old versus the new and it highlights a couple key features including an improved horizontal and vertical view, improved color-streaming capabilities, infrared stream, improved latency and that the new Kinect supposedly uses USB 3.0.

If you have the Kinect 1.0, you will know that there is a motor in the device that allows it to tilt up and down. Because of the increased field of view on the Kinect 2.0, it looks like Microsoft has opted to remove the motor to save money and make the device possibly more compact.

While Sony is likely set to announce the PS4 later today, Microsoft has still not given any official word as to when it will show off its next-generation console.