Nokia recognises the potential of establishing a strong smartphone presence in China. Last month, it launched the entry-level Windows Phone 7.8 handset, the Lumia 510, designed for large emerging markets such as China and India, and last week, it announced the Lumia 920T for China, featuring an uprated Adreno 320 GPU. Apple will also launch its iPhone 5 there imminently, with Yahoo News reporting that China Telecom will start taking orders for the device on November 20.

And yet, despite these efforts to capture the smartphone market there, it's not Windows Phone or iOS that have made significant inroads - it's Android. A report from Beijing's Analysys International shows that, over the past year, Android's share of the Chinese smartphone market has soared from over 58% to a staggering 90.1% by the end of the third quarter of this year. 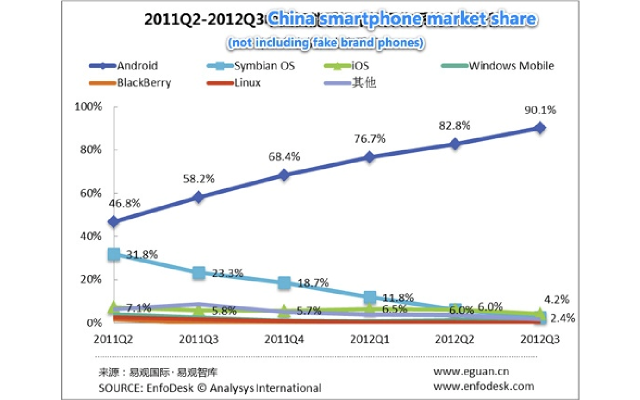 The assessment combines both smartphone sales and total ownership figures, and paints an incredible picture of Android's dominance in the Chinese market. It also excludes sales of 'fake brand' handsets, many of which also use Android.

Symbian market share continued to fall to its lowest level of just 2.4%, while iOS and Windows Mobile (including Windows Phone) both captured a minuscule share of the market. The high price of Apple's devices is an obvious limitation to its capturing a large slice of the pie, in a nation where rural workers work tirelessly to earn as little as $200 a month. China's average wages are rising quickly though - which is precisely why smartphone manufacturers see such great potential in planting their flags there early, but it's the lower-cost Android handsets that have clearly grabbed the attentions of Chinese buyers.

The average price of an Android device in China is now 1393RMB (Chinese Yuan Renminbi) or around $223USD, whereas an iOS device costs, on average, more than three times as much at 4523RMB, or around $725USD.

Android hasn't won the war yet though - while it's succeeding in grabbing an enormous share of the Chinese market, that market is growing, and there are still huge opportunities for the likes of Nokia and Apple to grab a considerable piece of the action as the smartphone market continues to expand.