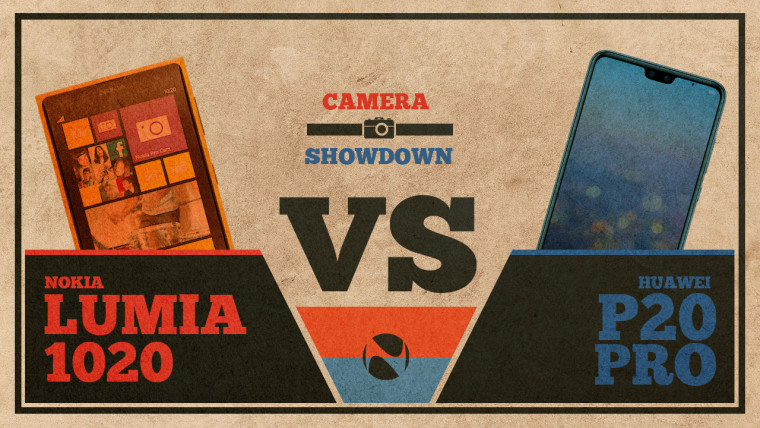 Last month, Huawei announced the P20 and the P20 Pro, the latter of which contains a 40-megapixel RGB camera, a 20-megapixel monochrome lens, and an 8-megapixel telephoto lens. Remember that the Nokia Lumia 1020 came out with 41 megapixel shooter back in 2013, so the P20 Pro is the first camera to have such a high resolution in almost five years. Naturally, it's time to put them head-to-head.

I know that smartphone camera technology has come a long way, and I fully expect the P20 Pro to best the Lumia 1020 in almost every way. Still, Windows Phone nostalgia and my inner nerd got the best of me, so I had to do it.

Before we look at some actual pictures, let's talk about the speed of the camera, and the features. These are areas where the Nokia Lumia 1020 was always lacking. Powered by a chipset that was outdated at the time of release, and having a camera resolution that wasn't even supported by that chipset, it was dreadfully slow.

Fans at the time argued that camera speed was a justified sacrifice in the name of image quality, but I always disagreed. When it can take over five seconds to load the camera and another few to focus and take a picture, you could miss your shot, especially when it's another five to ten seconds before you can get another one. Other phones at the time, like the iPhone 5s, could take pictures as fast as your finger could hit the screen, although you only got eight megapixels with that.

The Huawei P20 Pro is quite fast though. It uses a hybrid focus system to perfectly focus the image almost instantly. With the Kirin 970 processor's Neural Processing Unit, it can also tell what it's looking at and adjust the settings accordingly.

You might recall that a big feature of the Lumia 1020 was the ability to manually change settings on the camera. You can still do that on the P20 Pro, but you don't have to, like you kind of did with the 1020.

And of course, the P20 Pro includes other modern features like 4K video recording at 30fps, or 1080p video recording at 60fps. When Microsoft released Lumia Denim and added 4K video capture to some devices, the Lumia 1020 wasn't included simply because it was an underpowered device for such a powerful camera.

The truth is that 40 megapixels is much higher of a resolution than the screens that we're viewing the images on. An HD display is less than one megapixel, 1080p is about 2.1 megapixels, and 4K UHD is still around 8.3 megapixels. That means you can crop quite a bit out of a 40-megapixel photo without losing any quality.

The way it was implemented on the 1020 was pretty smart as well. The device took two photos: one was 5MP, and the other was 38MP, or 35MP at 16:9. After all, a 38MP image can be quite large, making it a pain to share. For almost everything, the 5MP image was shared, but if you chose to resize the image through the Lumia Camera app, the device would bring up the 38MP image and use that.

Huawei's P20 Pro works completely differently. You can choose to set the resolution on the device, with the obvious best two choices being 10MP and 40MP. As I said, 40MP images take up a lot of space, and the device won't let you zoom in at all while taking the picture.

The 10MP setting seems to be the sweet spot. You can toggle the P20 Pro to capture at 1x, 3x, or 5x zoom, and it uses the combination of the 40MP RGB sensor, the 20MP monochrome lens, and the 8MP telephoto sensor to get the best image. Of course, this means that you have less zoom to crop the photo after the fact.

In other words, you have to choose to zoom while you're taking the photo, or after you take it. Personally, I wish there was just an automatic setting that would take the highest resolution possible given the image I'm trying to take.

Now that we've taken a look at some cropped samples from the Lumia 1020, and some 10MP images from the P20 Pro, it's time to take a look at some 40MP photos in all of their glory. The following images are taken at full resolution, and are not edited at all.

Another thing you might want to take note of is the images where people are walking around, such as the one at Grand Central Station. The Lumia 1020 doesn't handle movement very well, and that's really just because the camera is so slow. You can, of course, adjust the shutter speed to minimize this effect.

The Nokia Lumia 1020 was well ahead of its time, perhaps too much so. For years, fans have asked for a successor to this legendary device, a handset with a 40-megapixel camera, but with modern technologies like a fast processor, phase detect autofocus, and more. That successor is here from Huawei, and with the completion of this article, I can finally put my Nokia Lumia 1020 to rest.