In the past few weeks Neowin has seen numerous bits of news about Nokia's flagship Windows Phone: the Lumia 800. Although we've seen this news there hasn't been much information about what the phone's actually like; it's about time that happened. The main question we have on our hands is: is the Nokia Lumia 800 worthy of being a good Christmas present?

From the early leaks of the Nokia “Sea-Ray” it was clear that the phone itself was going to be a very good looking phone, however the question of specifications and how Nokia would put its own spin on Windows Phone had journalists across the Internet pondering.

When the device was launched, it was not just another device from Nokia, it was a look into the future of Nokia. It appears that the company knew this too as they progressed to launch one of the biggest Windows Phone based campaigns that the operating system has ever seen (in Europe anyway). Due to the 'Amazing Everyday' campaign, Windows Phone awareness seems to have risen, at least the statistics seem to suggest so. 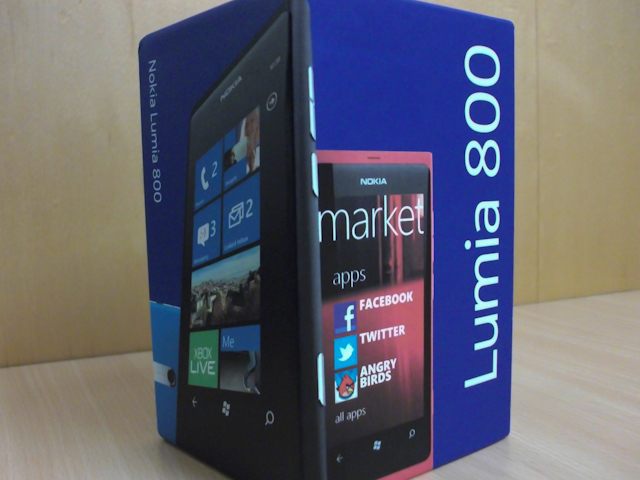 The Lumia 800 is based on the design of the N9 and specification wise it's very similar too. Sadly it seems Nokia has removed some of the features from the N9 such as the front facing camera, but as Windows Phone doesn't have many applications for it this isn't such a big deal. The full specification is as follows:

The device I received was unlocked and therefore was free from network branding. Regardless the Lumia comes in a plain blue outer box which typically lists such information as the IMEI and several other bar codes. As the device was actually set to be my personal device I was anxious to open it (I had prolonged it so I could get a camera to take pictures for Neowin) but when it came to it I removed the casing to reveal the actual box. The packaging is very much what you would expect from Nokia, eco-friendly and inevitably 100% recyclable.

Unboxing it was very typical of any smartphone. The device greets you first once you open the box and after pulling it out you're free to look underneath its bed where you find two boxes – one with documentation and the other with a free silicone case (I have to say I was happy when I saw that). You're then left with a mains charger, headphones and USB that's used for both data and power. 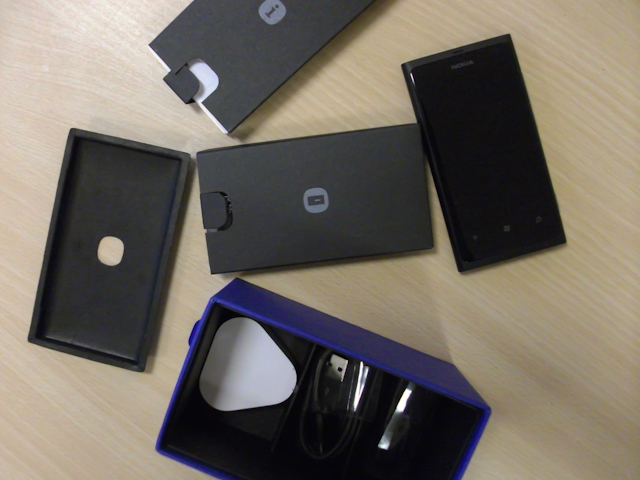 Assembly out of the box is next to none. Due to the battery not being removable, the phone didn't require a huge amount of setting up besides inserting the micro-sim into the roof of the device. I decided to add the case that comes with the device and would highly recommend everyone to do so due to the fact that the polycarbonate body seems to pick up marks very easily. The given case allows access to all the phones features including the speaker on the rear. Access to the micro-sim is blocked however, not that you will be removing it very often.

When the Lumia 800 was first released there we many journalists noting how good the device felt in your hand. I was a little sceptical about that claim because plastic phones generally feel rather tacky and low quality. When I did pick it up I noticed two things, firstly that for a smartphone it's quite heavy and secondly that my preconceptions of it were totally wrong. Somehow Nokia has managed to create a plastic (or as they like to call it “polycarbonate shell”) body that feels smooth in your hand, a premium feel that is difficult to compare against other plastics.

The ClearBlack AMOLED display on the Lumia accompanied with Gorilla Glass makes for a pleasurable viewing experience. My issue however is that for some reason the screen seems to attract a lot of fingerprint marks. Yes, you maybe thinking “well duh?”, but coming from a Samsung Omnia 7 I was used to wiping the screen a lot less often. I seem to be wiping the screen of the Lumia once every two or three times I use it, compared to the 5-6 times of use I got from the Omnia 7.

It's a small issue and one that a screen protector would likely fix. 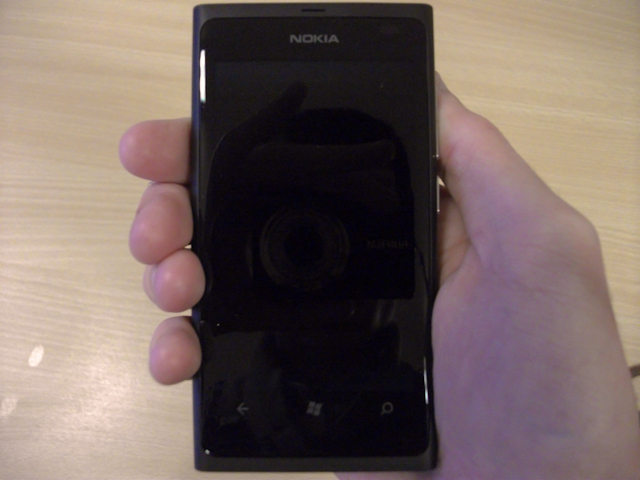 Nokia being Nokia, they have added some of their mapping awesomeness on top of Windows Phone to accompany Bing maps. In addition to the juice that Mango provides, Nokia have thrown Nokia Drive, Nokia Maps and Nokia Music into the current Mango fruit salad bowl. It's nice to have variety, eh?

Nokia Drive is simply Nokia's famous sat-nav (GPS) which has a wider range of features and more advanced GPS capabilities when compared to Bing maps alone. Nokia Maps is an app that seems to be a combination of local scout and a mapping system. You can ask for directions to a location and it will provide photos and locations you may want to visit, and combined with local scout you should never be in an unusual city without anything to do ever again.

Lastly is Nokia Music which at Nokia's announcement they seemed very impressed with. Essentially it's a little like Last.fm and Zune in terms of you buy music from the MP3 store and you can listen to music on the go; similarly it provides suggestions of artists you may like. In all honesty I don't understand why a Zune Pass or Spotify user would switch; I guess it's just another alternative that people are free to choose.

On to the camera, which for many is a key selling point of a phone. Nokia have always gloated about how good their cameras were, but would they be able to make another device that come with a good camera? Before getting ahold of the device I looked at some reviews of the camera of the Lumia and also some apparent video footage too. My reaction? I wasn't impressed to say the least. The camera quality looked like a camera phone that was made in 1999.

Reading the specification it 'boasted' a 8MP camera with a Carl-Zeiss lens, so why were people getting these results? I didn't rule out the camera completely though, I was interested in what type of result I may get and in fact the camera was one of the first features I tested on the phone upon unboxing it.

The overall verdict? It appeared that those who had taken photos with the device previously had been playing 'Who can take a photo the fastest?' as when I took a photo the quality was far above average, at least compared to my previous Omnia 7. Pressing the dedicated camera button loads the camera, pressing it again takes a picture as with any camera, but holding it down halfway focuses the camera and results in a good quality photo.

You can see an example of what I call a 'good quality photo' below. Needless to say it was tempting to use the camera of the Lumia to create the images for this review instead of the dedicated camera that I did use. 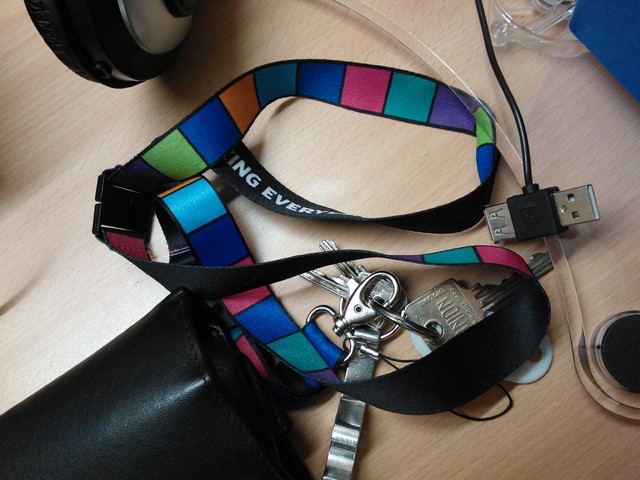 The biggest issue I have with this phone. It's been reported several times that the Lumia 800 has battery issues and when I checked to see if my phone was infected and found it wasn't it still made me think “wow, battery life is pretty slim.”

On idle the phone seems to hold its ground. Nokia claim a 9 ½ hour talk time on a 3G connection and 55 hours of music play back. In all honesty I don't believe that to be the case: the battery might possibly have the power to be capable of lasting that long but news released today suggests it may be the software not utilizing the battery power.

It has been said there will be a fix for the issue in January but for many users it maybe a big problem, especially for users that use their mobiles as music players as well. Yesterday I logged into Spotify on the phone and listened to my playlist for 2-3 hours. By the end of that time the battery was next to none and required a recharge.

So after speaking about all of that, the question remains: will the Lumia 800 put a smile on someone’s face this Christmas?

Having used the device for over 48 hours yet being familiar with Windows Phone, I enjoyed using the device. It provides a lot more than what I was using previously and meets any of my needs in terms of media. Again my biggest issue is the battery, however with January only around the corner I think that if you're unlucky enough to pick up a Lumia 800 with a huge battery issue, look forward to the software update which will hopefully realise the 55 hours of music playback that Nokia claims it has.

The Lumia 800 also packs a fantastic camera and sleek body whilst keeping ports discrete, a benefit for those that enjoy a great looking device without having large intrusive ports in the side of the phone.

So now that question is answered the next question is, will you be buying a Lumia 800 this Christmas? Tell us in the comments below.