The Nokia Lumia 800 was the first Windows Phone-based smartphone made by the Finland mobile phone company. The device, released in November 2011 in parts of Europe, was just the start of Nokia's commitment to Microsoft's mobile OS, which will end with Microsoft acquiring Nokia's Devices and Service division in early 2014. 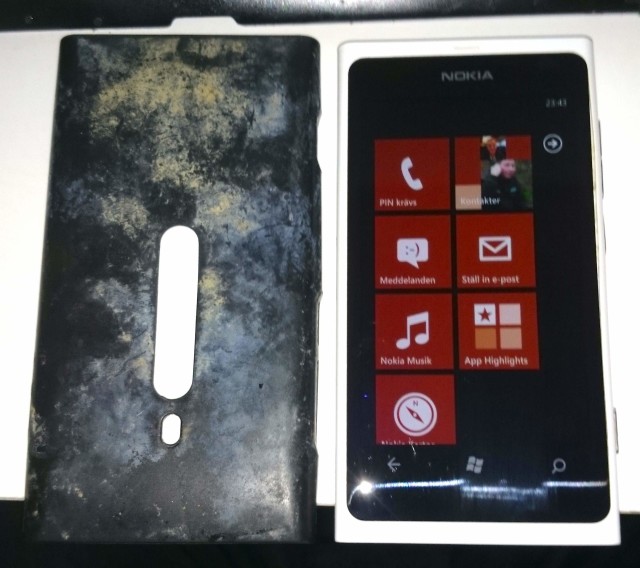 The Lumia 800 has proven its toughness in the past; at one point a unit was sent 105,000 feet into near-space by a weather balloon, taking pictures of its journey. Now a new post on Nokia's official blog reports that a Lumia 800 has survived after being at the bottom of a lake in Sweden for 3 1/2 months.

The blog post interviews Roger Nilsson, who helped to bring the Lumia 800 back to life. He states that a husband of a work friend of his accidentally knocked the Lumia 800 into Lake Ivösjön in Sweden. Another person found the same phone at the bottom of the lake 3 1/2 months later. The work friend brought the Lumia 800 to Nilsson, which was still covered in algae, shells and "brown stuff" and asked him to try to fix it.

Thinking the device was done for, Nilsson took six hours to clean the Lumia 800 and then put it under a radiator to dry it out for four days without opening the case. He adds, "On the fifth day I put the charger in it thinking either it will blackout my house or the charger would brake, but damn I was surprised when I saw Nokia on the screen and then the Windows Phone logo."

As it turned out, everything on the phone still works, with the one exception being that it "sometimes it wants to lower the volume by itself", according to Nilsson. That's still a pretty impressive ending for a phone that looked like it was going to be "dead in the water."

Thanks to EvilAstroBoy for the tip!