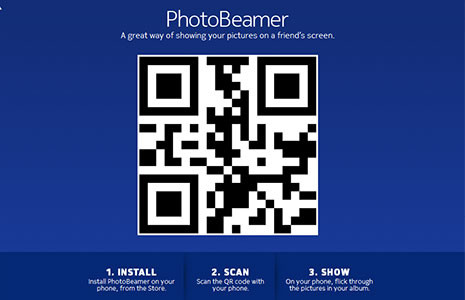 Nokia has developed quite a few Windows Phone apps on its own that can only be used by its Lumia smartphones, such as the City Lens app. Today, the company revealed yet another exclusive app, made just for its new Lumia 920 and 820 smartphones.

The app, called PhotoBeamer, provides a new way to show off pictures taken from a smartphone. The official Nokia blog has the info on PhotoBeamer, which is available to download for free right now for the two aforementioned Lumia devices.

You install the app and use it to look at pictures in your gallery. As soon as you open a picture, you’re told to go to photobeamer.com in any web browser (not the one on your phone!).  Point the phone camera at the QR code that appears on the website, tap it when it’s visible on the camera screen, and then the magic happens. Your photos are automatically transmitted to the website and shown on the screen without another click. It’s the fastest and most adaptable way to show off your pictures we’ve seen.

Nokia adds that the QR code that is shown on the Photobeamer.com site is unique every time the site itself is opened. It will work on 3G and 4G wireless networks, along with WiFi connections.

This app is the first major release by Nokia that comes from the team at Scalado. Formed in 2000 in Lund, Sweden, the company created hardware and software for mobile phone cameras; their technology has since been installed in hundreds of millions of devices. Nokia acquired Scalado in July for an undisclosed amount, and this is likely just the first of many exclusive Lumia apps for Windows Phone 8 that will come from this particular team.