Nokia may still be planning on selling off its Devices and Services division to Microsoft by the end of the first quarter of 2014, but it appears as if the company will make at least one final appearance at the Mobile World Congress trade show in Barcelona, Spain. 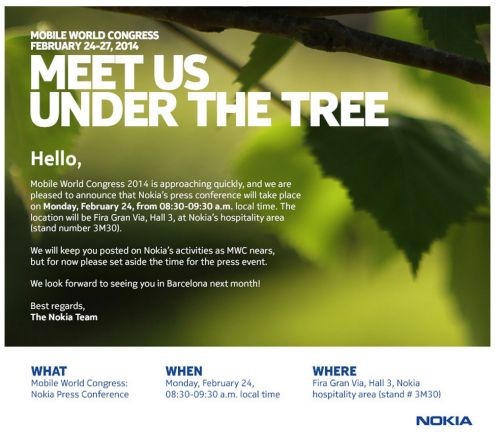 Neowin and other media outlets have been invited to attend a press conference to be held by Nokia on the first day of the MWC show on February 24th. The invite has no hints as to what the company plans to reveal for the event.

Nokia stated today that it is now listing the Devices and Services division, which includes its phone hardware business, as "discontinued operations" in its financial reporting. However, the over $7 billion deal to turn over that division to Microsoft has yet to officially close and Nokia hinted today that the two companies are still awaiting final approval from one or more countries.

As a result, Nokia might still launch one or more Lumia or Asha phones before the deal is completed. It's likely that one of them is the Lumia Icon for Verizon Wireless but there are still rumblings that the company might also launch its Android-based device, code named Normandy.