The major E3 gaming expo is only a couple of weeks away and rumors are swirling online about the new hardware that’s expected to be unveiled at the convention. We’ve known for a while now that Sony is looking to launch its new Neo PlayStation with a focus on VR, while only a few days ago we learned the first specific details of Microsoft’s own hardware refresh.

But while all of these rumors come from leaks or unnamed sources inside the companies, there’s one big announcement that has seemingly now been confirmed by the official E3 website. And that’s the fact that we may get to see Microsoft’s play for VR on the Xbox One at the event.

According to earlier reports, while Microsoft is looking to unveil a slimmer, lighter version of the Xbox One at this year’s convention, the company was planning to launch a much more powerful console, codenamed “Scorpio” next year. Scorpio was and is believed to be the company's main play for the VR and 4K gaming markets thanks to its rumored internals which are vastly more powerful that the current Xbox One's components. However, there was speculation that Microsoft would be forced to announce its VR plans as early as this year's E3, thanks to pressure from Sony, which is expected to focus on this market with the Neo console. 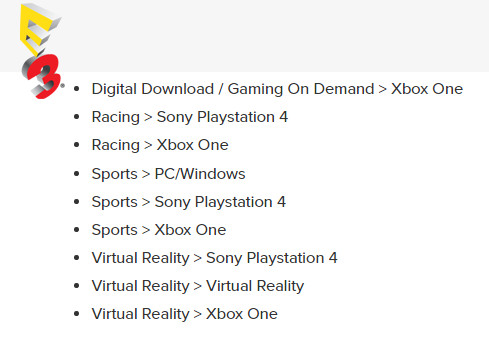 That speculation seems to have been on point and Microsoft now looks set to unveil its VR work this summer, as the E3 website now has a “Virtual Reality Xbox One” category. Originally spotted by a NeoGAF user, the section currently includes four companies, those being: 3DRudder, Maximum Games, Readily Information Company and Rebellion. At least two of these companies are known for their work in VR so this looks promising.

Microsoft is rumored to be trying to strike a deal with Oculus Rift for its play in the VR field. Also worth pointing out is another report from Ars Technica, which confirmed some VR titles for the Xbox One were already in development, meaning there’s a pretty good chance that Microsoft will indeed talk publicly about its plans for virtual reality gaming at this year’s E3.