It's only been a few weeks since Microsoft has released an update for the free OneNote app for Windows 8. Today, the company released yet another update that adds a feature that will please many users who access OneNote on touchscreen devices like the Surface. 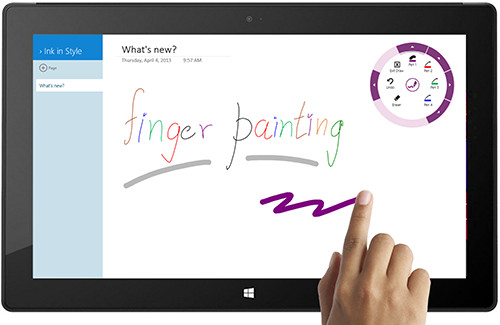 As described on the official Office blog, the new version now allows anyone to draw on the app just with their finger on a touchscreen, instead of using a pen or stylus. To access the feature, users simply tap on the app's radial menu and select  the Draw option. The blog adds:

From here you can get creative; choose pen colors, customize your thickness, and store these combinations as a 'favorite' pen.  Once you are done drawing, open the radial menu and select "Exit Draw".

Using a pen with the OneNote Windows 8 app is still a better choice than using a finger, but at least now there's an additional option in case you don't have one handy. Windows 8 users that don't have a touchscreen can still use the Draw option in the OneNote app via the mouse cursor. The new update is now available to download from the Windows Store. The change notes also indicate the new version adds support for "roaming list of recent notebooks".