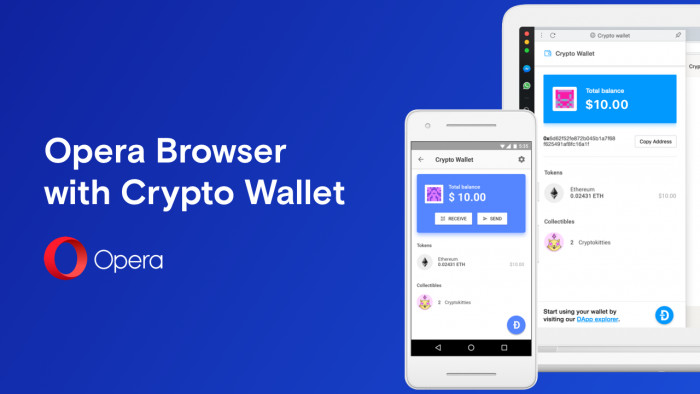 In the summer, Opera released Crypto Wallet for its Android (beta) browser, allowing users to store their Ethereum tokens and other collectables more easily and allowing them to spend directly with Web 3.0 services. Now, the firm has announced that in Opera 59 for desktop, which is currently in the pre-beta phase, users will be able to pair their Opera for Android beta wallet with their desktop browser.

To begin using the new wallet, you must have the Opera for Android beta installed which includes the wallet. You also need to install the first developer build Opera 59 for desktop. Once you’ve got these, you can create the wallet on Android and sync it with the desktop installation. Explaining what happens when the wallet is set up, Arjan van Leeuwen from Opera, said:

“After you pair your Opera desktop browser with your Opera for Android browser (beta), every time a website or Dapp (decentralized app) requires you to sign a transaction or message, a prompt asking for a fingerprint confirmation will appear on your phone. No need to set up a different wallet for desktop. Your wallet’s private keys remain stored on the secure hardware of your mobile phone and are never transmitted.”

In order to pair your computer and phone open up Opera developer on your computer, then press the crypto wallet icons on the sidebar. From here you need to press “Reveal the code” to bring up a QR code which you then need to scan in Opera for Android; to scan it, press the address bar and then press the QR icon in the top right. Once scanned, the two wallets will be connected.

If you’re concerned about the security of the wallet, Opera confirmed that it is “user-controlled” which means your keys for controlling the funds are only stored on your phone. As long as your phone is secure, your keys are too, with that said, it is beta software so you should not use the feature for storing large sums.