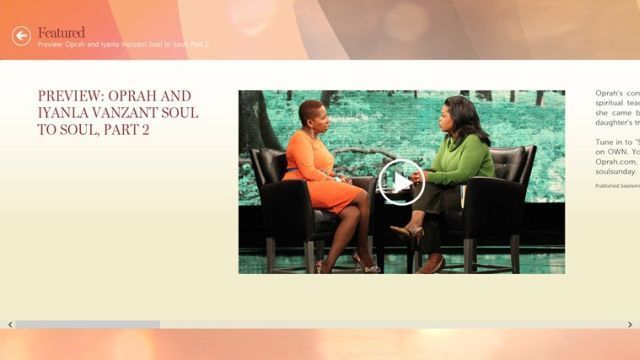 When Oprah Winfrey used to host a daily talk show, one of her most anticipated episodes was her yearly "Favorite Things". The people in the audience for these episodes always got tons of free, and usually expensive, items to take home, and any product named by Oprah as one of her "Favorite Things" usually saw massive sales increases.

Oprah shut down production of her talk show over a year ago, but she still is in charge of a huge media empire, including her own cable TV channel, the Oprah Winfrey Network (OWN). Now her official website has posted up her 2012 "Favorite Things" list and the Surface tablet from Microsoft happens to be one of them.

In the listing, Oprah writes:

The Surface, Microsoft's first tablet, feels like a Mercedes-Benz to me, people! The full-size keyboard built right into the cover makes work easy, the very smart kickstand makes watching a movie or Skyping a friend a delight, the less than a pound-and-a-half weight makes a great alternative to a laptop, and the many other features make it fun for work and play. Now, that's a wowser!

We have already reported that OWN has its own Windows 8-RT app. This week, the network has released a second app, Oprah: Live Your Best Life, which lists Oprah, once again, as its developer. This app offers up information about health and food, along with more information about Oprah herself.