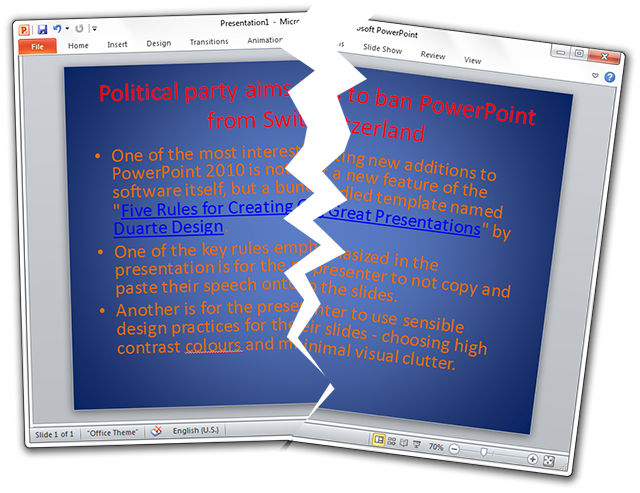 One of the most interesting new additions to PowerPoint 2010 is not a new feature of the software itself, but a bundled template named "Five Rules for Creating Great Presentations" by Duarte Design. One of the key rules emphasized in the presentation is for the presenter to not copy and paste their speech onto the slides. Another is for the presenter to use sensible design practices for their slides - choosing high contrast colours and minimal visual clutter.

Despite that, almost 85% of PowerPoint audiences tune themselves out during presentations, employees and sleepy college students alike. Thus, a new movement named "The Anti-PowerPoint Party" seeks to eradicate use of PowerPoint and its presentation software competitors. The movement's first steps for advocacy is a bit politically strange, with a new political party registered in Switzerland under that same name.

According to PCWorld, the party claims presentation software costs the Swiss economy almost 2.1 billion Swiss francs annually, with the figure rising to 110 billion Euros for Europe. The party's founder, Matthias Poehm, is a public speaking trainer by profession. His current objective is to net a nationwide referendum on the subject, should his party gather 100,000 signatures in a petition. In addition, he plans to present candidates for an upcoming national election, in the hopes of placing his party as number 4 in the Swiss National Council.

Poehm admits his political ambitions are a "promotional gimmick," stating his book "The Powerpoint Fallacy" is available at a discounted price for party members.