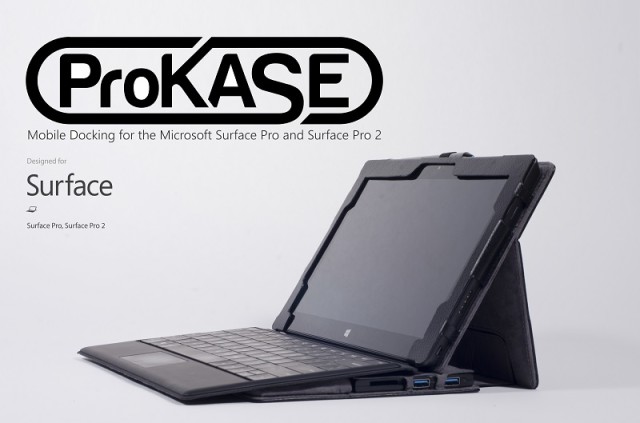 Microsoft has an intriguing product with its Surface Pro tablet/PC hybrid. It's a hard device to pigeonhole because it's capable of many different tasks – it's not a pure tablet, it's not a pure PC – but it's still a great device, and given the recent supply shortages, appears to be gaining popularity.

A plethora of first-party attachments have already been announced with more on the way, but there's no reason enterprising individuals can't create their own. Enter the ProKASE, a crowd-sourced case for the Surface Pro and Surface Pro 2 on Indiegogo. In addition to protecting the device, it has a few tricks up its sleeve. The most obvious is that the ProKASE allows the display to be tilted at different angles, the keyboard is tilted up, and the sturdier base may improve the ability to use the Surface on your lap.

Additionally, the device has some technical improvements, including a built-in USB hub that adds a few more USB3 ports as well as an SD and CF card reader. The extra ports aren't automatically active though: Users have to connect a built-in cable to the USB port on the Surface Pro itself.

The project has raised $1,700 so far and has a goal of $11,000. Unlike Kickstarter, however, projects on Indiegogo can be funded regardless of whether they meet the funding goal, and the creators of the ProKASE say that they've already begun producing them and will be ready to ship soon. In addition, the creators say this is their first "Designed for Surface Pro" project and that they are dedicated to creating more Surface products (as well as other "Designed for Microsoft" products) in the future. There have been plenty of successful businesses launched on crowdsourcing sites, and we hope this one succeeds.