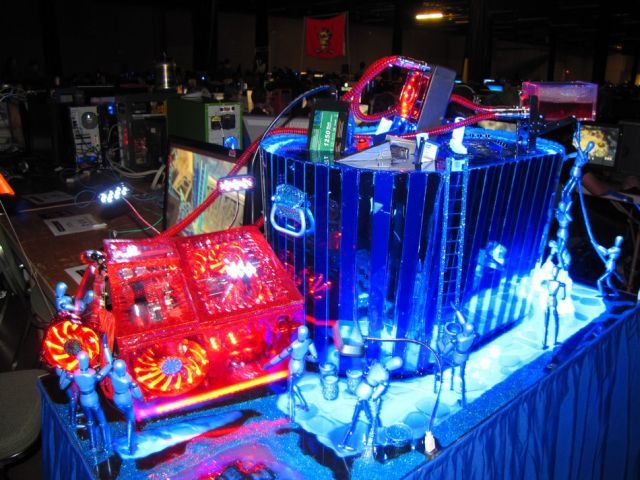 As usual the BYOC area at QuakeCon 2011 was filled to the brim with thousands of PC gamers (and even a few console gamers) that were playing games into all hours of the day and night. While there were some gamers that brought in notebooks to game on, the vast majority of QuakeCon BYOC gamers still rock the massive tower PC case. A number of them buy cases and then customize them with lights, artwork and such. A few people brought in massive 55 inch flat screen TVs to game on. However, we were interested in seeing the folks who truly went the extra mile and made custom PC gaming rigs that stood out from the crowd. Thankfully we saw some.

One gamer brought in a PC case that was almost completely filled with some kind of liquid solution. It's a very weird effect just seeing a PC that's running with parts inside what looks like water. We imagine that cooling is not an issue for him. Another gamer made a PC inside an ATV buggy model that he painted out with logos and artwork for id Software's upcoming first person shooter Rage. Yet another gamer had what looked like a smaller PC resting on top of his large tower case. In fact it was an Xbox 360 inside a custom made case. Nifty

One gamer in the BYOC area brought in an older and big CRT monitor but removed its guts and put in a 17 inch LCD for the screen. He then put the PC components in the old monitor. The result was a PC with a transparent screen where you could see inside but still also see the PC desktop screen via the LCD flat screen. It's a very weird effect.

But by far the most impressive custom PC at QuakeCon this year was the massive construction that you see above this news post. The PC is so big we had to take several shots of it to get the full effect; you can see them in the gallery below. The PC looks like it is being constructed by those small figures on the sides. The case took a year to complete and, yes, those solid state drives and the DVD drive that you can see on top of the "tub" do indeed work. For you hardware fanatics, the PC itself has an Intel i7 950 processor, two Nvidia video cards in SLI, about 12 GB of RAM and three solid state drives (two 120 GB drives and one 20 GB drive). It's going to very very tough to top this case for QuakeCon 2012.