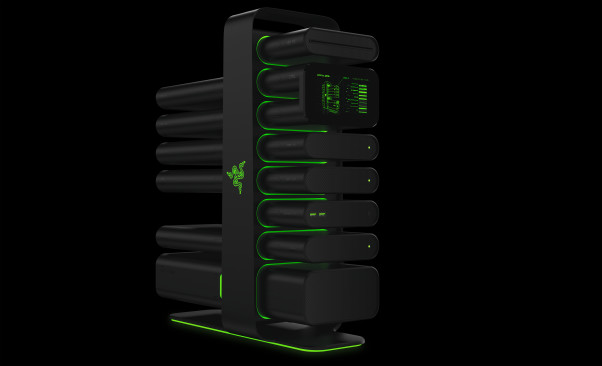 Razer has announced the design for a desktop PC concept that can be quickly upgraded, even if the owner has no idea how to put in new memory sticks or a new motherboard. The concept has the code name "Project Christine" and was revealed today as part of the company's CES 2014 lineup.

The idea behind Project Christine is to develop a PC that has interchangeable modules that will have the parts like the CPU, GPU, RAM, storage drives, motherboards and more. It uses PCI-Express to sync up each part. The press release states:

The modularity of Project Christine make it perpetually customizable, offering plug-and-play upgradability as new and improved technology evolves, ostensibly eliminating the need to replace entire systems. Modules connected to the PCI-Express backbone can be added in any order or combination, featuring up to quad-SLI graphics, multiple SSD and RAID storage components, I/O and even power supplies, ensuring maximum flexibility.

Even though each module is designed to be self contained, they can also add features like liquid cooling in order to overclock parts like the CPU and GPU. The design also has an LCD to offer the owner information about the status of their system.

Razer has a history of announcing concepts that are later turned into full-fledged consumer products, such as "Project Fiona", their Windows-based gaming tablet that was first announced at CES 2012 and was later launched in March 2013 as the Razer Edge. It's more than possible that a version of "Project Christine" could be launched to the public sometime in the future.