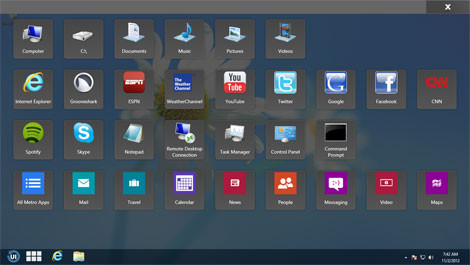 RetroUI from Thinix has received a lot of attention as an alternative for Windows 8 owners to accessing the "Modern" Start screen. The company released a major update to the program just a couple of weeks ago and today, just before Thanksgiving, Thinix has now released yet another new version that adds some more features.

The new 2.1 build of RetroUI allows Windows 8 users to skip the Start screen from a number of other situations, such as interactive logins, a login from locked workstation, and a login from a remote desktop. The new version now supports auto-logins as well.

The Enforce feature in RetroUI, which adds a taskbar and Start menu button to the Windows 8 Start screen, has also been improved to allow for more keyboard shortcuts for "Modern" Windows 8 apps. The new version also eliminates the so-called "Hot Corners" in Windows 8, which bring up menu features when you move a mouse or a finger close to one side of a screen. Thinix says that this new feature that disables "Hot Corners" still allows for the full use of the OS.

Finally, the new version has some performance and loading improvements as well as some updated theme colors. RetroUI costs $4.95, or $9.95 for a license to use it on up to three PCs. There's also a seven-day free trial available. We also want to point out that this program is for Windows 8 only and won't work on Windows RT-based hardware.