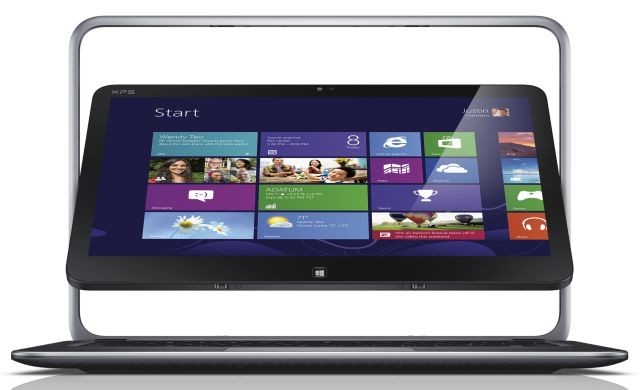 Before the launch of Windows 8, the idea that a PC notebook could also serve as a touch screen tablet was almost non-existent. That has certainly changed thanks to Microsoft's newest OS, which offers the typical keyboard-mouse desktop UI combined with the new "Modern" touch screen user interface. That has resulted in quite a few major PC makers to introduce products that let users switch the configuration of a PC from a laptop to a tablet-like product.  The media have struggled to give these kinds of PC an overall category. Some refer to them as "hybrids" and other call them "convertibles".

There have been a number of different ways PC OEMs have chosen to design these kinds of devices for Windows 8, and no two of them seem to be completely alike, which is either good or bad, depending on your point of view. Dell has certainly hit the ground running in terms of embracing the dual nature of Windows 8. In late October, it launched its own notebook-tablet hybrid-convertible, the XPS 12, which can switch from the familiar notebook design to a more touch friendly configuration thanks to a revolving hinge in its display. Dell's particular solution is very distinctive but 90 percent of the time, we suspect that its owners will use it as a more conventional notebook rather than as a tablet. 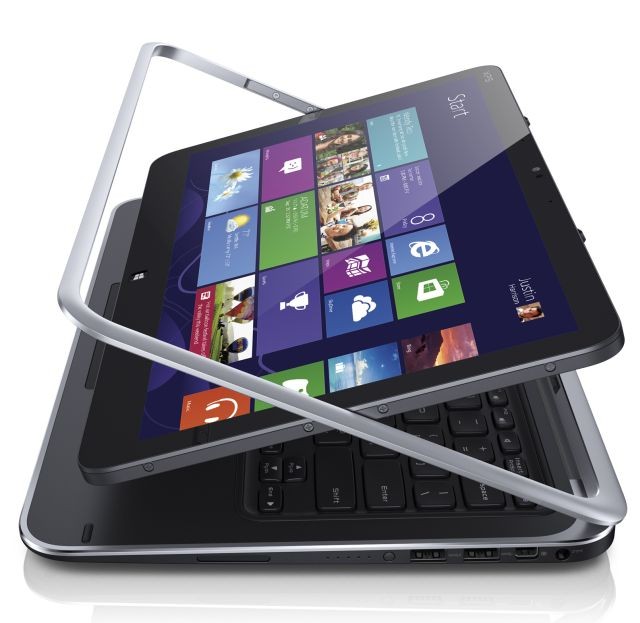 This notebook has all of its ports on the left and right side of the notebook. There are no ports on the front or back side. Each side has a small speaker, and they deliver good, but not great, audio while we used the device. The left side of the XPS 12 has the power and reset button, the headphone port, and a volume control rocker if you use the XPS 12 in tablet mode. The right side has the port for the power cord port, along with a mini-Display Port and just two USB 3.0 ports. We would have preferred at least one more USB port and maybe a mini-HDMI connector on either the left or right side, and some people might not like the fact that it doesn't have a MicroSD card slot. However, we are dealing with a notebook that is supposed to be in the "thin-and-light" Ultrabook category so some compromises must have been made by Dell to keep the weight as low as possible.

The biggest thing most people will notice is the silver hinge that allows users to rotate the screen of the Dell XPS 12 180 degrees. The hinge then allows the screen to fall down on the notebook's keyboard, turning it into a big 12.5 inch tablet. It's a mode that will come in handy for viewing content in the Windows 8 "Modern" UI as well as using its touch screen based apps. The screen itself was very responsive to our fingers and overall we were impressed with the display.

However, as you might expect, we don't think most owners will be using the Dell XPS 12 as a tablet for the majority of its life. Holding a 3.35 pound product in a tablet configuration with two hands is simply too taxing for the average owner for long periods of time. The tablet form seems to have been put into the XPS 12 more for convenience in accessing the "Modern" UI than anything else, but that's not necessarily a bad thing. We can imagine people using it in tablet form flat on a surface if they are on their bed or on the floor to play a game or watch a movie.

The materials of the case

As far as the construction of the XPS 12, Dell has decided to use carbon fiber for its base as well as the top of the notebook. The frame is based on aluminum and the keyboard is using magnesium. Finally, the display is covered with the tough Gorilla Glass that is gaining more and more use in laptops as well as smartphones. All in all, this is not a flimsy notebook and should hold up well with a lot of use, which should make the owners, particularly those who travel a lot, quite happy. Dell says that its owners can expect the rotating hinge for the display to last 20,000 rotations and if that really turns out to be true that should be more than enough for most owners.

The notebook itself has curved out its edges on its case; even the backlit keyboard buttons have a somewhat curved design. It gives the notebook more of a modern and slicker look than the normal laptop. Overall, typing on the keyboard is solid and comfortable and the backlit key feature is helpful when the notebook is used at night. The included touchpad is also well designed and easy to use for those folks who want to use the desktop UI and don't have a handy mouse around. The touchpad is a bit harder to use in the "Modern" UI of Windows. It's just not as responsive as we would like with the Windows 8 touch gestures. On the other hand, we suspect most XPS 12 owners will go ahead and simply touch the display itself in that mode, even when it is being used as a notebook.

The bottom of the notebook has two horizontal ridges which give the XPS 12 a slight boost upward. The bottom of the case also contains a vent that pushes out the air from the XPS 12's fan. You likely won't hear the fan too much unless you are playing a "Modern" Windows 8 game. 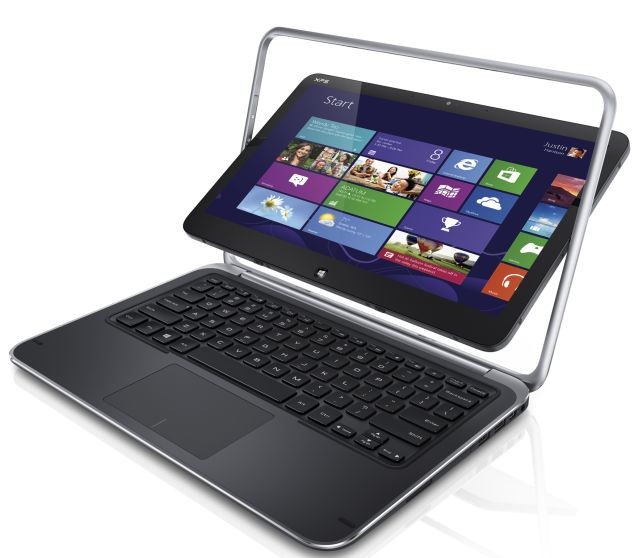 Battery life for the XPS 12, at least in our experience, was around five hours or so. We used the notebook for regular uses such as web surfing, writing and playing games such as Angry Birds Star Wars while under battery power only. While not the worse battery life we have ever experienced in a thin and light notebook, we would have liked to have seen the XPS 12 last at least six hours under battery energy, especially since it uses an SSD drive, which in theory should make the notebook more energy conservative.

Unfortunately, the battery is also not removable so if you really need some extra energy and you are not near a power outlet, your only bet is to buy some kind of external battery pack. It's a little annoying but this is par for the course in terms of most thin and light Ultrabooks.

Thanks to both the improvements put into Windows 8 itself as well as its use of an SSD drive, the XPS 12 started up from us in just a few seconds. It also quickly started up from its "sleep" mode. Hopefully, the days of waiting and waiting for a notebook to start up when you push a power button will be well behind us in the near future.

The Intel graphics chip is not made for high end applications such as high end PC games. We suspect this will keep most hardcore PC gamers from using this as their portable gaming computer but, again, that's to be expected from a product such as this that's made for a casual PC user or one that travels a lot on business. Perhaps in the future Dell can squeeze in a dedicated NVIDIA or AMD graphics processor inside another hybrid Windows 8 notebook.

As one of the first Windows 8 "convertible" products on the market, the Dell XPS 12 acquits itself fairly well for the most part. We loved the tough construction and owners who mostly use it as a notebook will likely enjoy it, while also enjoying the option to turn it into a tablet for brief periods of time. If you are looking for a notebook that has a bit more battery life, you might want to look elsewhere, along with others who prefer to have some more ports.

It's a solid first effort at a hybrid-convertible Windows 8 device and we think that Dell will offer up more of these kinds of products in the near future that will have some improvements. It also bodes well for the hybrid PC category as a whole. Despite what other companies might think, we believe that offering consumers products such as the XPS 12 will be a viable compromise between a true notebook and a tablet. The key for PC OEM makers is to come up with just one or two designs that really work well, and we think the XPS 12 is an example of a design for a convertible that works well.