This is the core problem with (almost) every Kinect game released thus far: It features gameplay elements that would place any other game in a clearance bin at Wal-Mart, but YOU CAN USE YOUR HANDS! Somehow, this is meant to be a redeeming factor from a gameplay point of view, and the lack of a controller is supposed to make the gaming experience somehow more enjoyable in and of itself. So, most Kinect games are stuck in an identity crisis. On one hand, they’re games, which should be enjoyable for all the reasons that we enjoy games. On the other hand, they need to show off their mastery of the Kinect platform, as that is the reason monstrosities like Zumba Fitness exist in the first place. What you get is a confused mess of great ideas and bad gameplay that’s great to show off to your friends, but become boring 20 minutes in. Developers are slowly coming around and releasing standalone controller games that feature Kinect integration (Forza 4, Mass Effect 3), but they are still few and far between.

If there was one game that claimed that it could be tech demo and a fun game to boot, it would be Kinect Sports. It’s a cute collection of mini-games that integrate with your Xbox Live avatar nicely, and are user-friendly enough that players of any age shouldn’t have a problem with the basics. However, start getting into the higher difficulty levels, and you start realizing some of the gameplay nuances that the basic tutorials gloss over. There is actually depth there, and mastering my ball spin in bowling became a bit of an obsession.

Kinect Sports Season 2 promises to follow up on that goal, creating another slew of games that market the platform well, as well as provide significant challenge and nuance for those that want/need it.

There has been marked improvement in Kinect responsiveness, making navigation and gameplay quicker and snappier. The Kinect sensor is a powerful thing, and in taming it, developers apply different levels of smoothing to make the average player’s jittery hand look like a master of extremity control. In early Kinect games, this translated to inaccurate, sluggish UI. With Kinect Sports 2, developers came a lot closer to a sweet spot where cursor movement is smooth yet responsive and accurate. I also noticed a decrease in time to activate a UI element by hovering the cursor. This is a surprisingly refreshing change.

One problem I had with Kinect Sports was the amount of screens it took to begin playing a game. Since each “button press” in a Kinect game takes time, this made the process of entering a game tedious. The UI has been greatly improved in Season 2, requiring half the amount of steps to actually start playing a game. We also are given the option to control the UI entirely by voice command, and this works well.

Voice actions are spread out throughout the games and UI, and work great. You can navigate from the title screen to playing a game using only your voice, and it’s quicker than using the cursor. There were times when I had to repeat myself, but it wasn’t often, and I began to rely on voice actions in the UI rather quickly. 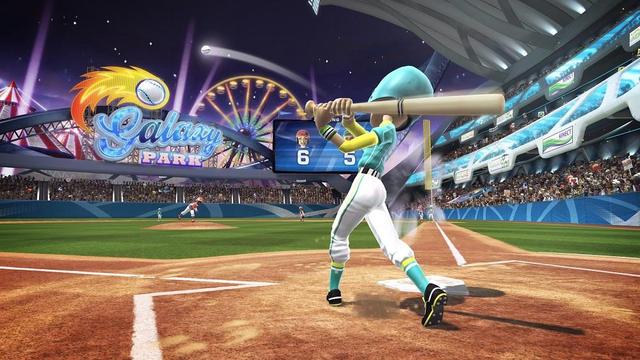 Football (American) – This had so much potential, and much of it is squandered. With such a wide variety of movements, Football seemed to be the perfect match for a Kinect game. Instead, we’re limited to a gimmicky “Ready, Hike!” voice command, followed by a chance to throw to your receivers, who will always catch the ball if an icon above their head is green. You get four downs to reach the end zone, and you’re automatically given the extra point. There is a kicking aspect to game, in the form of a field goal, yet you don’t get a chance to kick for your extra point. That was an odd decision. You’re given a grand total of nine passing plays to choose from, and they only differ in passing distance. There is no strategy here. Once you catch a ball, you run in place, and hope your avatar gets lucky and stiff-arms some defenders.

Speaking of defense, there is none. I was flabbergasted. When you score a touchdown, or you don’t reach the end zone in four downs, the computer automatically takes its possession, randomly scoring or not scoring, without any player input. I felt cheated. The game really boils down to choosing a meaningless play, swinging your arm towards an icon that turns green, and then running for your life, getting randomly tackled by AI. Multiplayer simply has your partner play as receiver, just running in place. Sounds exciting.

Baseball – Another sport that I was excited to play, Baseball does well in certain things and falters in others. It’s a little too strict about batting stance, as there is no on-screen feedback to show you what you need to change. Since the view changes to first-person as the ball is pitched, it’s hard to judge when you should swing. Once you get it down, though, it’s a satisfying experience.

Pitching and fielding are executed well, however. Pitching is especially fun, as there are different nuanced ways of throwing the ball that can vary curve, speed, and handedness. The catcher gives you hints as to what pitch the current batter probably won’t hit, so your pitch choices won’t be random. If a fielder has a chance to catch the ball, you’ll get a chance to put your hand on in the general vicinity of an icon, and you’ll catch the ball.

It’s not the most compelling competitive experience of the bunch, but it’s polished and executed well. 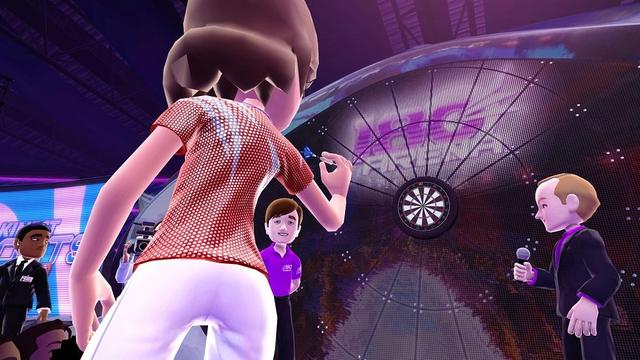 Darts – The simplest game collection manages to be the most exacting and challenging. Accuracy is a big deal here, as you would expect, and it seems like Kinect is tracking every tiny movement of my throw, which is really just a flick of the wrist. I know this is true because I found myself holding an imaginary dart, and releasing it as I mimed throwing one. I could have easily made a fist and accomplished the same thing, but the drawing back and throwing motions are so exact and satisfying that I just naturally started holding a dart. When you miss your target, it was because you flicked your wrist a little too high or low, not because the AI decided you should miss this one.

For those not familiar or just not interested in the intricate arithmetic involved in darts scoring, the game shows you where you should aim to score a 0. However, this can be turned off for more competitive play.

Golf – Technically, this game could have been a standalone title. It features everything you could want in a casual golf game: club choice, accurate swinging, practice shots, holding your hand to your head to get a closer look at the green, and various other nuanced details that make for some decent immersion into an otherwise point-and-swing game.

With unlimited practice shots showing you exactly where a ball will land and easy as pie putting assistance, the game isn’t as compelling as it should be. It seems dumbed down for the casual crowd, and the difficulty setting simply increases the likelihood of your opponents to score lower. The motion tracking is impressive as far as measuring power goes, but it’s hard to screw up when you can take unlimited practice shots.

Skiing – This immediately brought back fond memories of Alpine Racer in the arcades of yore (yore defined here as 10 or so years ago). It’s a natural fit for a motion game, and it certainly delivers from a technical standpoint. It doesn’t offer a lot of variety, though, and it got bland pretty quickly. It’s nice to be able to crouch for speed, and spread out your legs for wider turns, but jumping is uninspired, and just serves as an excuse to add a gesture to the game.

Tennis – If you played table tennis in Kinect Sports, you’ve played this game’s tennis. The controls are exactly the same, and require the same range of motion. I’m not sure where Rare was trying to go with this, to be honest. In many ways, table tennis felt more compelling, because you were moving around a roughly equivalent space, around a ping pong table. Tennis is the same thing, just with automatic and exaggerated movement, which makes the experience feel regurgitated.

Minigames – Each game features a minigame that goes with it, and typically involves accuracy tests for each game style. Swinging at targets in golf, Home Run Derby in baseball, and hitting tennis balls at targets basically sums it up. There’s not much there, but it is more content, and it’s a nice quick diversion. 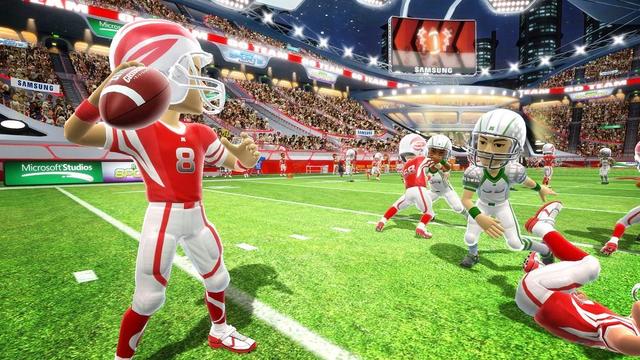 As before, you can play online via XBL, but a new function called Challenge acts as Rare’s version of Autolog. It tracks your scores and matches them up with your friends, so you don’t actually have to compete online at the same time. Matchmaking is a quick process, but it still will put you up against a seasoned veteran seemingly at random.

Kinect Sports Season 2 is easily one of the most technically advanced motion games around. It’s executed well, it’s got great value as far as family games go, and it’s definitely a blast to play with others in the room. Some of the games, specifically darts and golf, are a shining example of what the Kinect platform is capable of doing, and the limits that developers continue to push back.

However, it does suffer from my original problem. The quality of gameplay is purely dependent on motion control and not on good game design. A football game that only lets you throw and run just isn’t a compelling competitive experience for me. A year after release, we’re past the time where developers still need to show off how awesome Kinect is, and I still felt in places like this game was a tech demo more than a game that I was excited to play.

Nevertheless, as a casual game to play with family and friends, it can’t be beat. While it isn’t the most engrossing and intense competitive simulation, it’s still a great party game, and a great presentation of what Kinect gaming is capable of. If that’s what you’re looking for, Kinect Sports: Season 2 certainly delivers more than anything else in the current Kinect lineup.