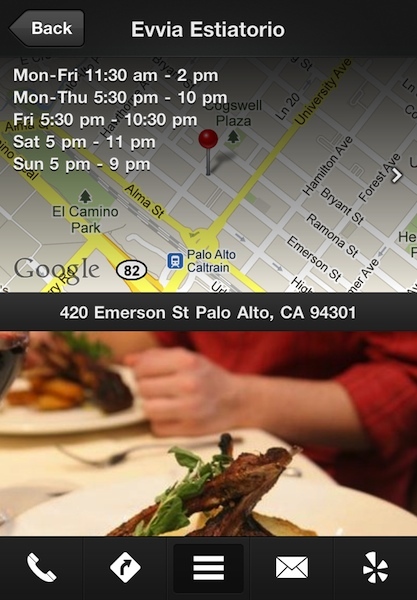 Have you ever thought to yourself that there weren't enough restaurant apps? I'll give you a hint: the answer's probably no. With a slew of apps designed to show you the nearest restaurant, it can be hard to find one that does everything you want it to. So when Seven Minute Labs came to us with yet another restaurant app, it was hard to get excited. But MealTime sets itself apart in one key area: it focuses on the visuals of food above everything.

"We have one mantra," the company explained, "a picture is worth a thousand words, so the key to better food discovery is a better 'visual search'." MealTime achieves this by giving a visual list of all the nearby restaurants. Touching one brings up photos associated with that restaurant, so you can see the food before you make the journey. As someone who has to eat to survive, I was excited.

Default sorting isn't exactly self-explanatory, and it was only by going to the settings that it turned out the default setting is "Smart". From what I can deduce, Smart listing tries to strike a balance between price, rating and distance, but as a poor student the first choice of an upmarket French outlet wouldn't be a smart choice. Luckily, the settings also let you filter by price, and having gone suitably downhill in the quality department I was recommended a nice low budget place a couple of kilometres down the road.

Right, so now I've found my outlet, it's time to get started. MealTime doesn't make it clear where the pictures have come from, but in all the tested restaurants every photo was spot on. The first thing you'll see in the scrollable list of pictures is a mini map with the address and opening times. An option in settings lets you filter out places that are closed, so if you need food right that very minute, you can get it.

Scrolling through I managed to find a Nando's. Not the classiest of places, but hey. If I decide it's chicken o' clock, MealTime gives a one-touch option to phone the place ahead of time and make sure they've got room. Another touch and I've got directions. Another touch and I can email my friend about it. No text message option though, which is a bit of a pain as I tend to text people the name of places. 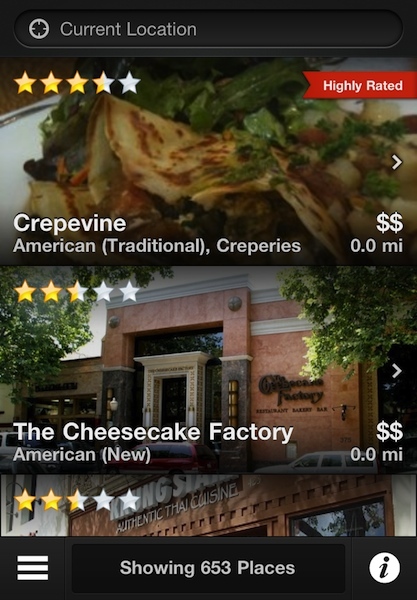 MealTime does bring a certain charm to the whole eating out experience. There's always been that moment before when you see someone else's food going past and wonder what they're having based on sight. Top chefs pride themselves on the visual side of things just as much as the taste. If food looks good, you want it. Simple.

The app came up with a good selection of eateries too. Admittedly I found the app a lot more handy when sorted by distance, though. Driving directions and top choices that are a few miles away leads me to believe that this app is for people who drive. Two-legged simpletons like myself will probably get frustrated at the inability to narrow down the distances, leaving you with lovely pictures of food that's just a tiny bit too far to walk for. 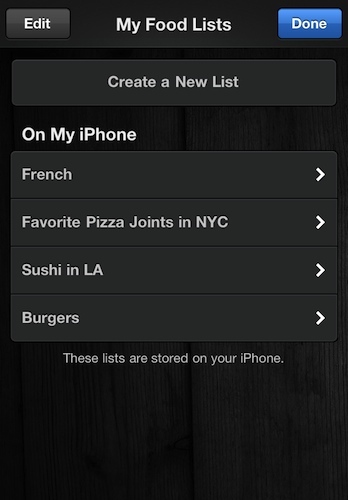 One thing I can see coming in handy is the Food Lists feature. This lets you make a list of your favourite places (say, Chinese takeaways) and see them all on a map or list for easy access. It's a good way of making note of places you want to go back to, and the app will even let you write notes about your list (something like "Don't order the Americano at Joe's Pizza").

From an interface point of view, the app could do with a bit of polish. I'm used to flicking through photos, not scrolling through a list of them. Scrolling through places by photo felt a bit awkward at times, and the names were sometimes hard to read. A bit more contrast or even a text-only option would give this app the potential to replace AroundMe, my current source of nearby food.

It's hard to fault MealTime at the price it's being offered for (absolutely nothing). With a few fixes it could grow to be an essential app, and for a first release it shows serious potential. Finding places by what they look like is a novel idea

MealTime is available from today in the iOS App Store, and can be downloaded for free.