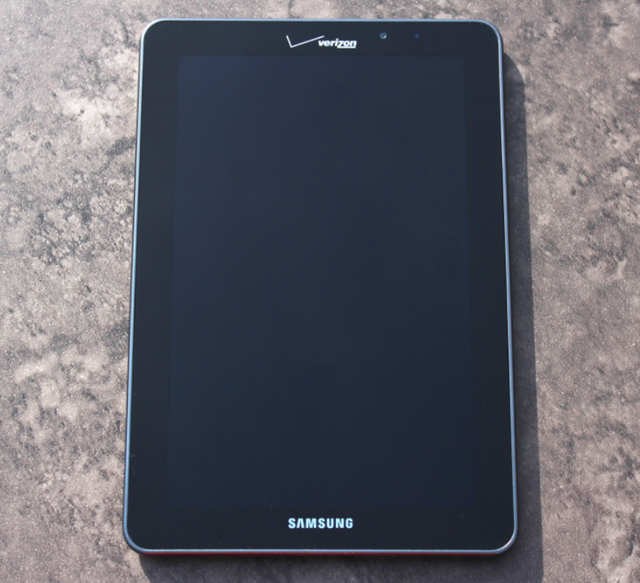 The tablet market is quickly evolving, while there used to only be one player in the market, the segment is now filled with hundreds of options. Neowin has Samsung’s Galaxy Tab 7.7 with LTE for Verizon and we take this small but mighty tablet through our daily journey to see how it compares to others such as the recently reviewed Droid Xyboard.

The Samsung Galaxy Tab 7.7 with LTE has a beautiful 7.7in AMOLED display that brings out the true beauty of this device. The screen is a dream to use but at times, especially at full brightness, does feel a bit over-saturated. The dual core 1.4 GHz processors gives it the chops to keep up with the Joneses and the 3.2MP rear camera and 2.0 MP front facing camera fill all of the major needs of most tablets users. The full spec sheet is posted below. 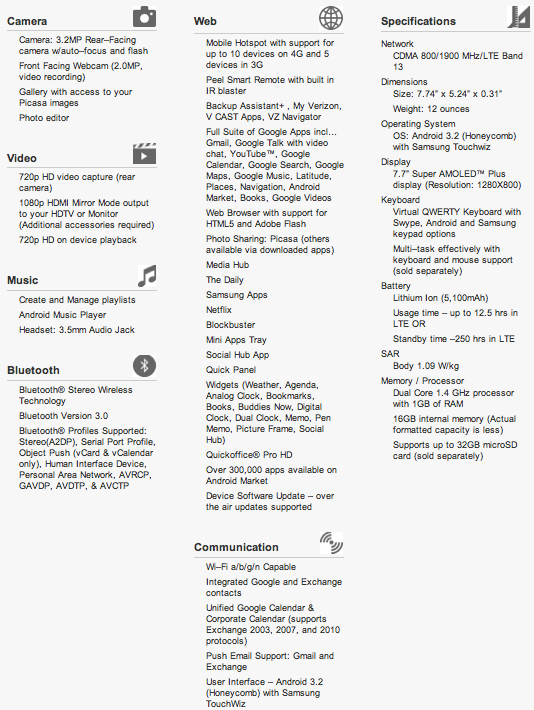 Holding the 7.7in tablet feels incredible; the device is sleek, well built and quite thin. There is most certainly a feeling of quality to the materials that Samsung selected when building this tablet and it shows in the final product.

The standard buttons are all accounted for with a volume rocker on the right side and the power button is positioned above the volume rocker. The volume rocker has a satisfying click to it when pressed and leaves no doubt that the button has been pressed properly.

One issue we do have with the design is the rear camera has a protective ring and lens cover that protrudes from the sleek profile. Now, this extension is small and does not hinder from the sleek lines but when you place the device on its back on a hard surface the protective covering contacts the surface. Why is this a big deal? Well, for starters, it will be sliding around on the ring and has the potential to scratch the covering. 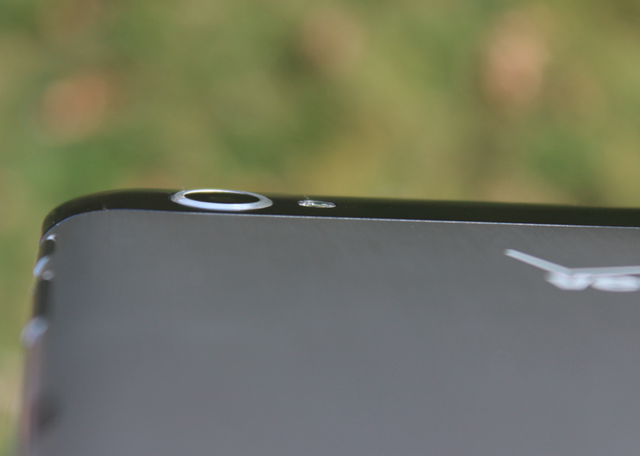 It’s a small issue but for those who will keep their tablet for many years, it is possible that the scratched cover could degrade the camera quality.

One of the biggest disappointments with this tablet is that it ships with Android 3.2. The lack of 4.0 (Ice Cream Sandwich) is a major letdown as 3.2 has consistently had subtle fluidity issues that 4.0 should fix in the tablet environment. We should note that this device has been promised by Samsung to get ICS but when that will occur, has not been detailed by Verizon or Samsung.

Other than running 3.2, the device ships with the standard Verizon applications including Blockbuster, Netflix, VZ Navigator, and a few others.

Samsung also feels that it is important to slap its TouchWiz UI on top of Android that we must argue against; skins had their time and place when Android launched, but at this stage, they add bulk to the OS that is no longer necessary.

One of the applications that is included that we love is called Peel which uses the built in IR to act as a television remote. The setup with this application was simple and took us 10 minute to get our Samsung TV and DVR programmed. 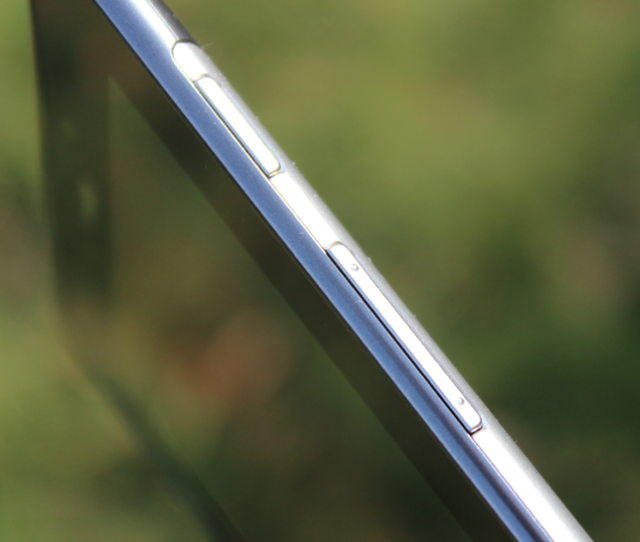 Running Quadrant on this tablet returned a score of 3770, which places it above the previous Tab. But, benchmarks do not show the entire picture and bluntly, benchmarks are not important to the average consumer who simply needs a device to perform instead of outperforming others in a synthetic test.

There are times when this tablet feels as if there is not enough horsepower under the hood as transitions between applications feels disjointed and web pages load in a way that appears to be stair stepped rather than simply popping up as you might expect.

But, we do believe that ICS will remedy these small occurrences of lag that is if you are willing to wait for the update. 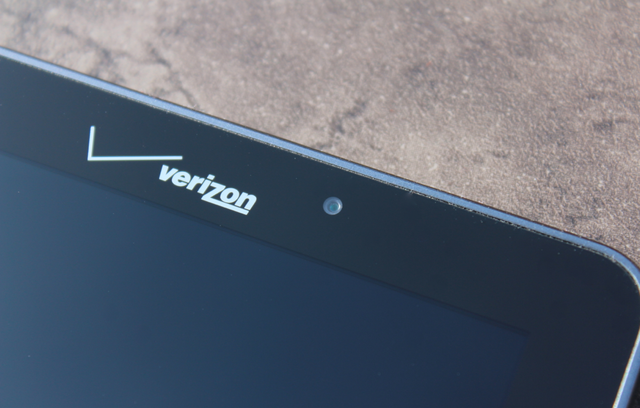 Tablets and cameras have a funky relationship as typically your smartphone will have a superior camera to the tablet and using a tablet to take a photo feels (and looks) awkward. 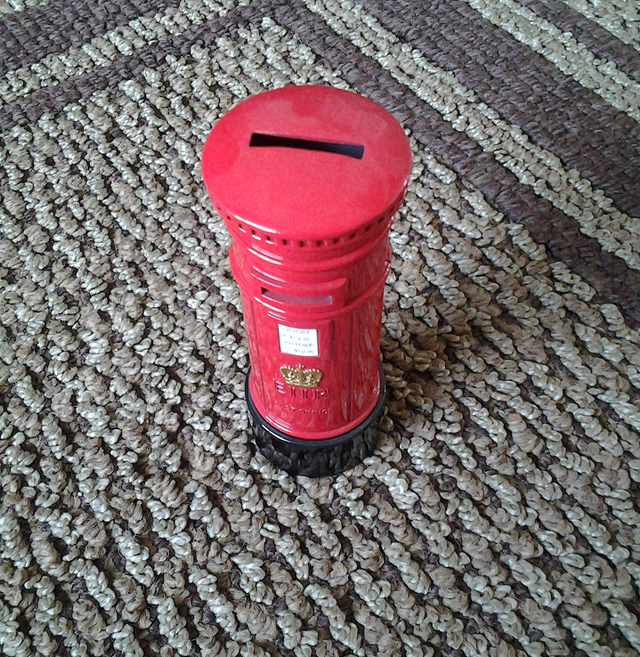 That being said, there is horrendous camera lag, upwards of 3 seconds from when you press capture to when the image is snapped, that renders the camera useless for capturing moving objects. When the pictures do finally take, they are a bit grainy and occasionally washed out; don’t expect to be the next Ansel Adams with your tablet.

The front camera will get the job done for video calls but was typically a bit cool but does not present any barriers to use. 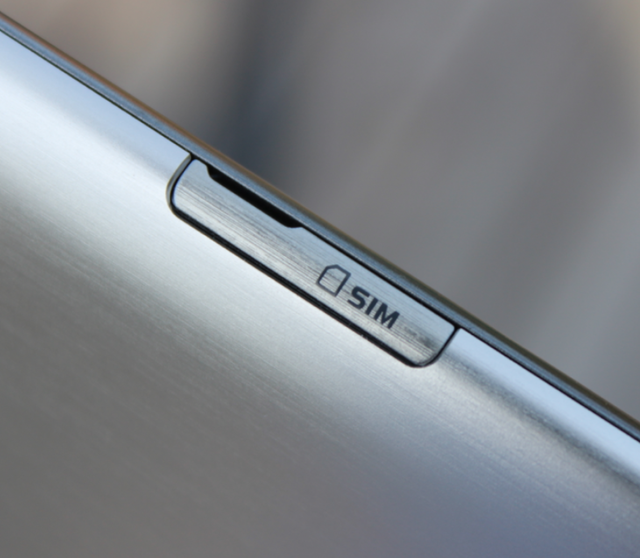 One of the key selling points of this device is the 4G connectivity and for that we averaged 12 down and 6 up which is astounding for a wide band network such a this. There is not much else to say other than LTE is a game changer and we love devices that sport the new technology. 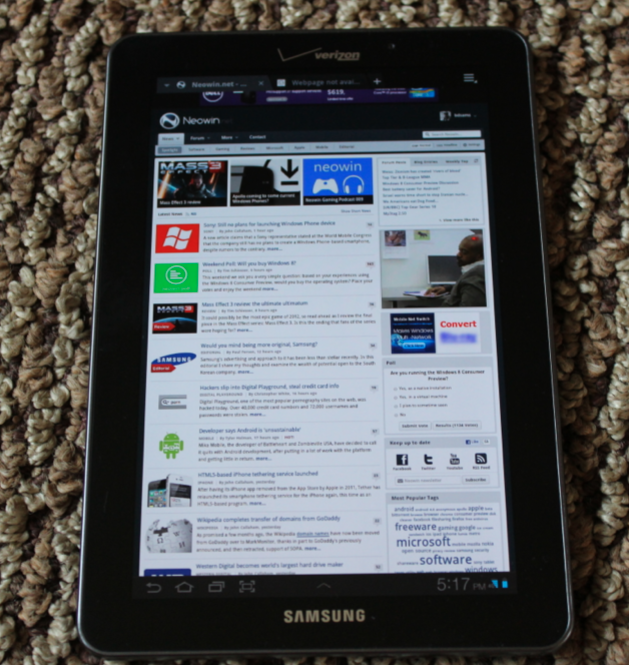 Running a video on loop that was streaming across a home network, the device lasted a bit under 8 hours but non-streaming web browsing the tablet will run about 11.5 hours without needing to hit your nearest outlet. The battery actually exceeded our expectations given the size and should hold up well for most users.

There is a lot to like about the 7.7 Tab as the size is perfect for frequent travelers. In fact, the size is, in our opinions, better for those on a plane where space is limited as the device is small enough to easily be tucked away but large enough for watching videos on a long flight.

But, while there is a lot to like, there are several key downfalls with the 7.7 Tab with the biggest being price. The device hits the register at $499 with a two-year contract or $699 contract free, which for us, is a deal breaker.

When you compile that it runs Android 3.2, has an underwhelming camera, and lack of fluidity in transitions, it’s hard to decide if the high quality build and form factor outweigh the downfalls.