Trillian, the popular instant messaging client, has reached version 5 after a lengthy beta program. Developed by Cerulean Studios, the software has been around since late 2002 as an alternative to Windows Live Messenger and also incorporates several other IM protocols such as Google Talk, Skype, Facebook Chat and more.

With v5 there have been major updates to the interface, ditching the dated Astra interface for a more polished Windows Ribbon-style approach. Mail, social networks and contacts are now all present in the main panel and controls have been slimmed down into a neater and more compact style, which is (finally) resizable. The new theme looks amazing and feels like it belongs with Windows 7 where Trillian Astra could never quite do the same. 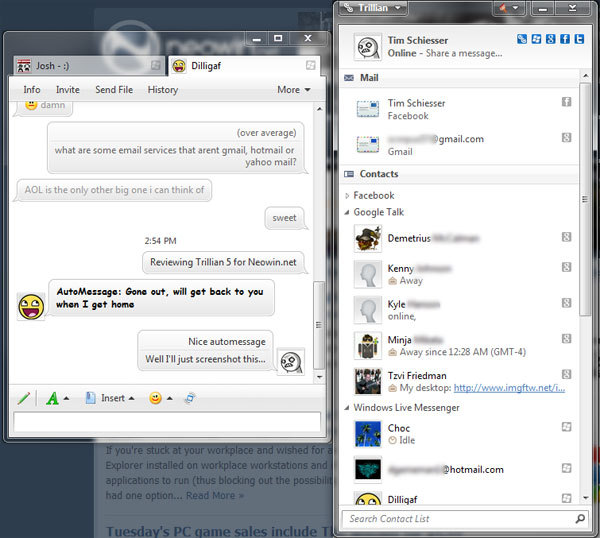 Conversations are carried out using a bubble-like approach and all other conversations are tabbed in the one window; similar to Windows Live Messenger 2011. This saves a lot of screen clutter and makes juggling conversations that bit easier. Two other very neat new features to Trillian 5 is the ability to store your conversations in the Astra cloud (Pro users only), which could come in handy for those that worry about their computer’s HDD storage solution, and also the “continuous client” – this feature updates your chats in real-time between the devices you are signed in to via Trillian Astra.

Trillian 5 also greatly improves social network integration. Trillian hides your connected social networks into simple tabs that, when moused over, display the content from your various feeds. Unlike WLM 2011, this is a non-intrusive way of displaying social networking and does not compromise the performance or other features of the client. It’s a standalone unit that functions well, and despite Microsoft’s efforts with WLM 2011, Trillian’s integration is without showstopper bugs that WLM 2011 has. 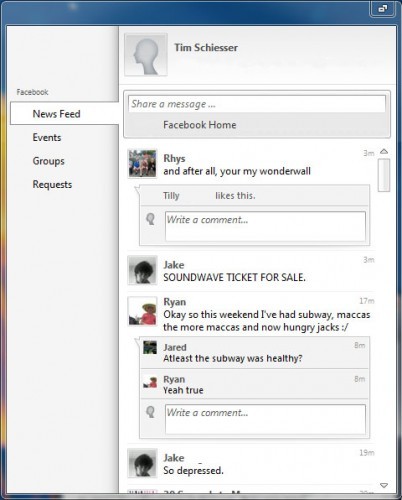 For the first time, Trillian 5 is now bringing Pro features into the client for free. This includes the ability to sign in from multiple locations, activity history, themes and several other features. To help make Trillian a free client, the developers have included ads into the software which can be removed via a paid ($12 annually) Pro account.

During our testing we experienced no advertising in the client at all, despite not using a Pro account. We’re not entirely sure why ads weren’t being displayed, but according to Cerulean Studios the ads are “organic members of your chat window – meaning they scroll away naturally – and do not animate, do not play sounds, and can be hidden on an individual basis. ” This sounds okay, but increased advertising in a client that originally had none for free users is a disappointing downgrade.

The amount of new features present in Trillian 5 is not huge, but there are some notable improvements to how the service works and certainly to how it looks. If you’re a Windows Live Messenger user there are definitely enough extra (working) features to warrant using Trillian over it, and you’ll most likely be granted with less advertising. While we were disappointed to see the inclusion of advertising in Trillian 5, this will hopefully be unobtrusive when actually displayed and not disruptive enough of the generally great client.