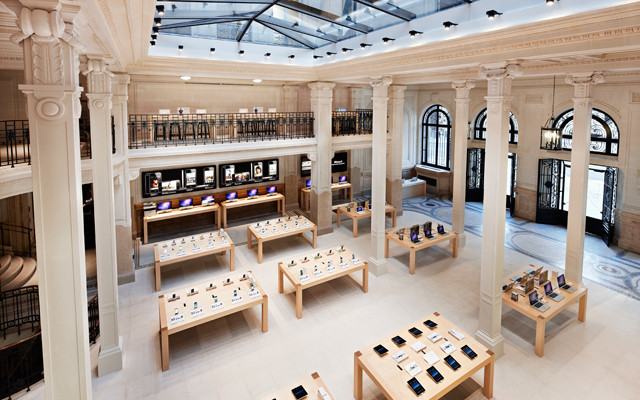 New figures from Needham analyst Charlie Wolf, given to AppleInsider, have shown that revenue in Apple Stores has declined by as much as five percent in March, after a three percent bump in sales around Christmas. According to Wolf, much of the problem comes from consumers awaiting new Apple products as well as the range of of other stores selling key products, such as the iPhone. Says Wolf, "meaningful growth [in term's of sales from the Apple Store] must await the introduction of new products in new product categories." He does, however, acknowledge that Tim Cook has spoken public about "new product categories" that are "coming soon."

"The sales performance of the Apple Stores is also hostage to the company's distribution strategies," writes Wolf in his letter to investors. "To illustrate, Mac sales in the stores were adversely impacted in 2009, when Apple broadened Mac distribution in the U.S., adding other chains, such as Best Buy, as resellers. iPod sales in the Apple Stores tanked when iPod demand caught up with supply and Apple responded by vastly increasing the number of outlets selling the product. Same-store sales have also been affected by the roll-out of the iPhone to carrier stores around the globe."

Customers obviously do not feel the need to go to Apple Stores when other stores, which may be nearer their homes, stock Apple products. This is a double edged sword: Apple still gets the increased sales from stocking products in a wider range of stores but misses out on foot-traffic into their own stores and, thus, loses sales of accessories or other smaller items that customers may see in their stores and purchase alongside a new Apple product.

"Despite the dramatic expansion of Apple's distribution network to the stores of 250 carriers, the Apple stores have managed to almost hold their own as a percentage of total Apple revenues," Wolf's note says. "This underscores the vitality of the Apple Stores in creating a shopping experience that we believe is superior to that in any other retail chain."

China is another issue that Apple is tackling in terms of sales, where many cheaper Android devices are pulling the metaphorical carpet from under Apple's feet in terms of device sales. According to Wolf, the future could be bright with his note casting an approving light on incoming retail chief Angela Ahrendts who boosted Burberry's sales in China when she was CEO of the clothing company.