I've reviewed my fair share of Wear OS smartwatches, and while the designs and hardware is often fantastic, they always leave something to be desired. It's not the OEMs' faults either; that's all on Google and Qualcomm. One thing that I haven't dove into is Samsung's lineup of smartwatches, mainly because I don't often use Samsung smartphones.

But for my Galaxy S20+ 5G review, I really wanted to try out the Galaxy Watch Active2 to see what Samsung has to offer. Samsung uses Tizen, so this is a completely different experience from Wear OS, although it does work with any Android phone.

As it turns out, it's everything that I wish Wear OS was. Samsung's Exynos chip is fast, and the software has pleasant and consistent animations. The hardware is solid, with a beautiful curved glass round body and a Super AMOLED display. It also adds Samsung's Touch Bezel, and if you go for the stainless steel model, 4G LTE.

There's also a smaller model with a 1.2-inch display. The screen resolution is the same, so it has a higher pixel density, although it does have a smaller battery at 247mAh.

Samsung's Galaxy Watch Active2 is probably the sexiest smartwatch on the market. The company really did a great job with it. The chassis comes in either aluminum or stainless steel, and you can get it in Aqua Black/Black, Cloud Silver/Silver, or Pink Gold/Gold. As noted above, the aluminum ones are Wi-Fi only, while stainless steel comes with cellular.

I went with Cloud Silver aluminum, sacrificing a fair bit of style while opting not to spend the extra $150 for cellular connectivity that I won't use. Note that compared to an Apple Watch, this is an incredibly inexpensive device. 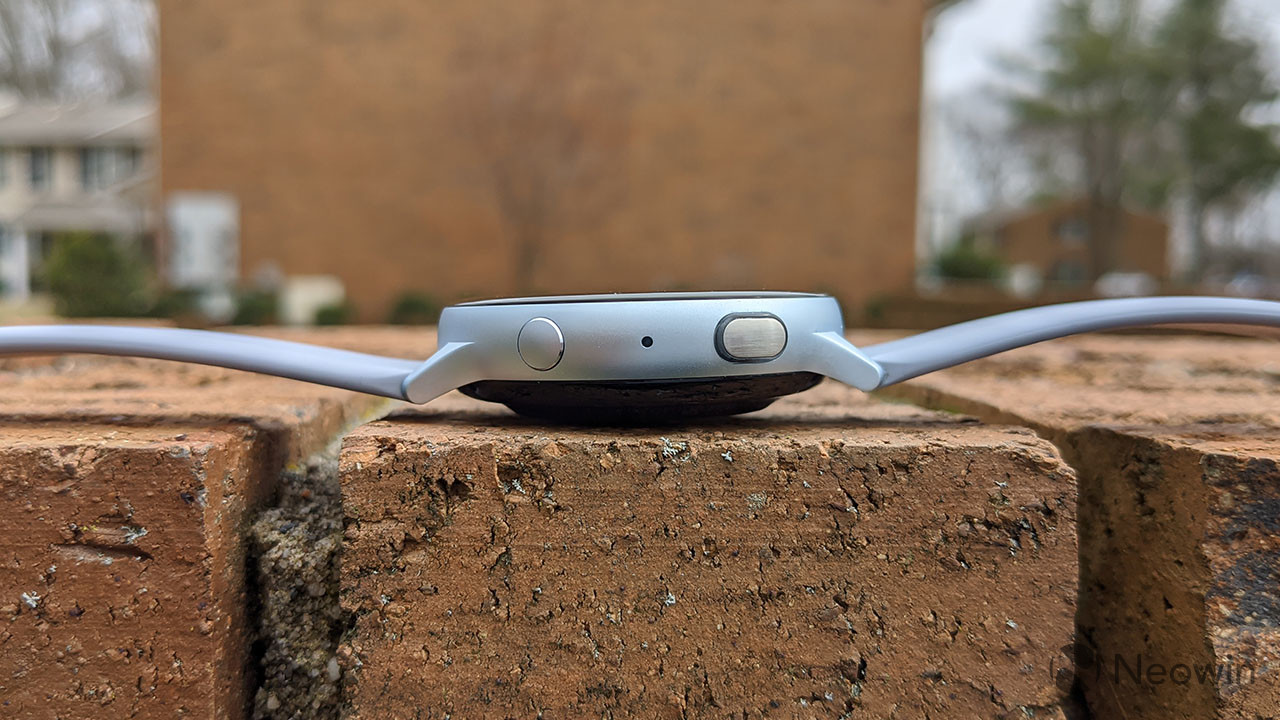 The aluminum models have a matte finish on the body, and it's also lighter than the 44g stainless steel model, coming in at 30g. There are just two buttons on the side, with the top one serving as a home button and the bottom one acting as a back button. 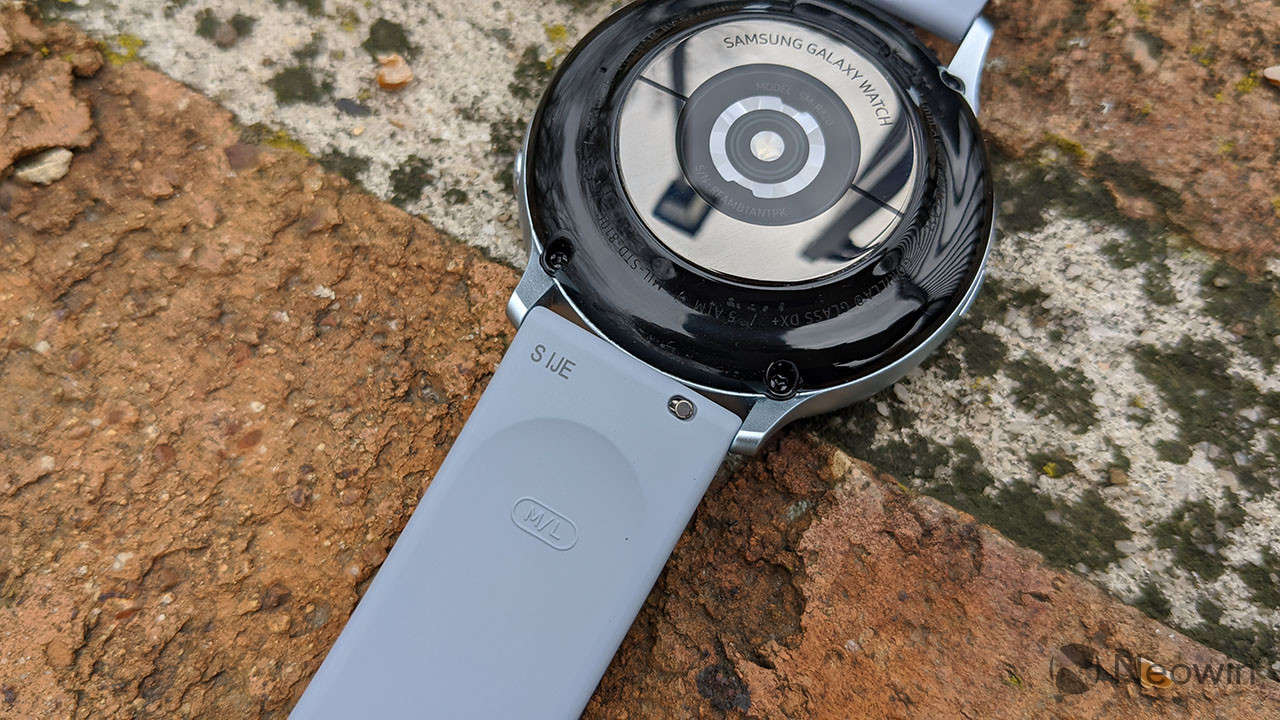 It uses standard 20mm bands that are easy to replace with the pin mechanism that's common in smartwatches. It's a silicone band, as you'd expect from a sporty device like the lighter aluminum model, although the stainless steel one does come with a leather band. Naturally, you can swap them out, get third-party bands, and play around with it. 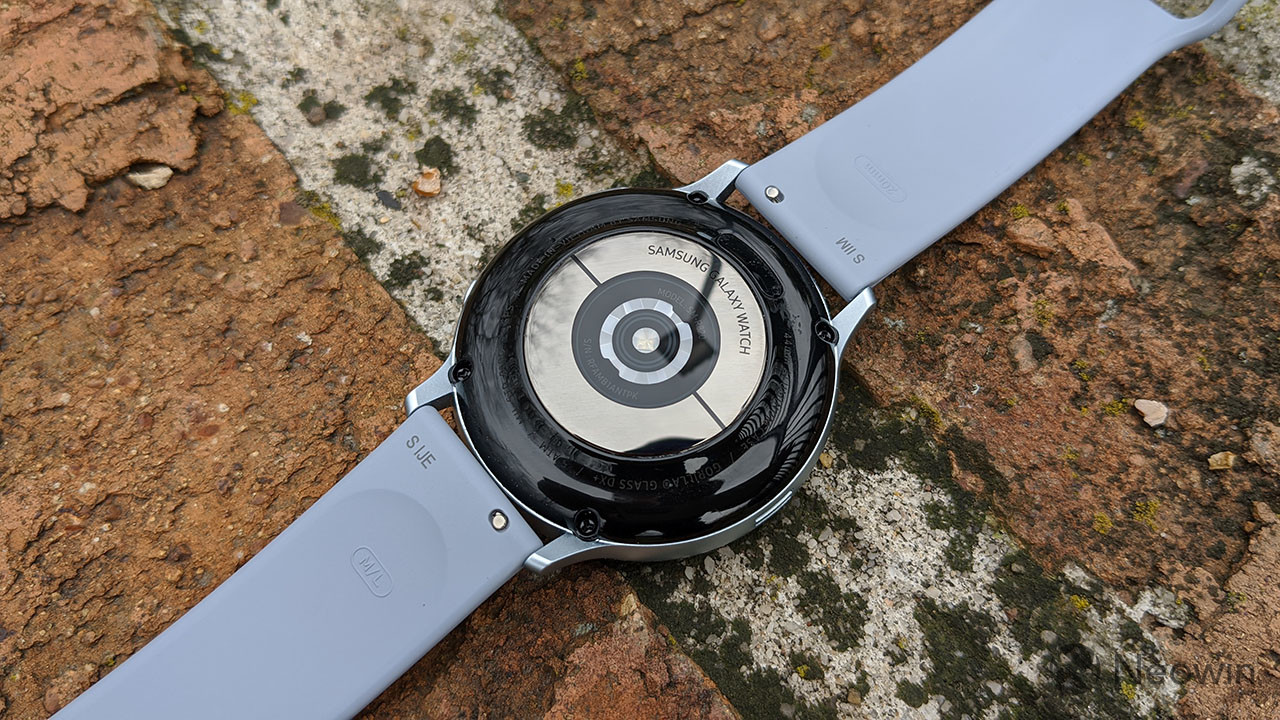 The bottom of the device includes your standard heart rate sensor, but one thing that you'll notice is that there are no charging pins. Yes, this smartwatch actually supports wireless charging, something that's something of a rarity these days. The only other current smartwatch I've used with the feature is the Apple Watch.

I really want to praise Samsung for this though, because charging pins suck. Yes, I said it. They get dirty after you wear the watch on your sweaty wrist for a time, and they require cleaning to properly charge your device. That's just not a problem with wireless charging. 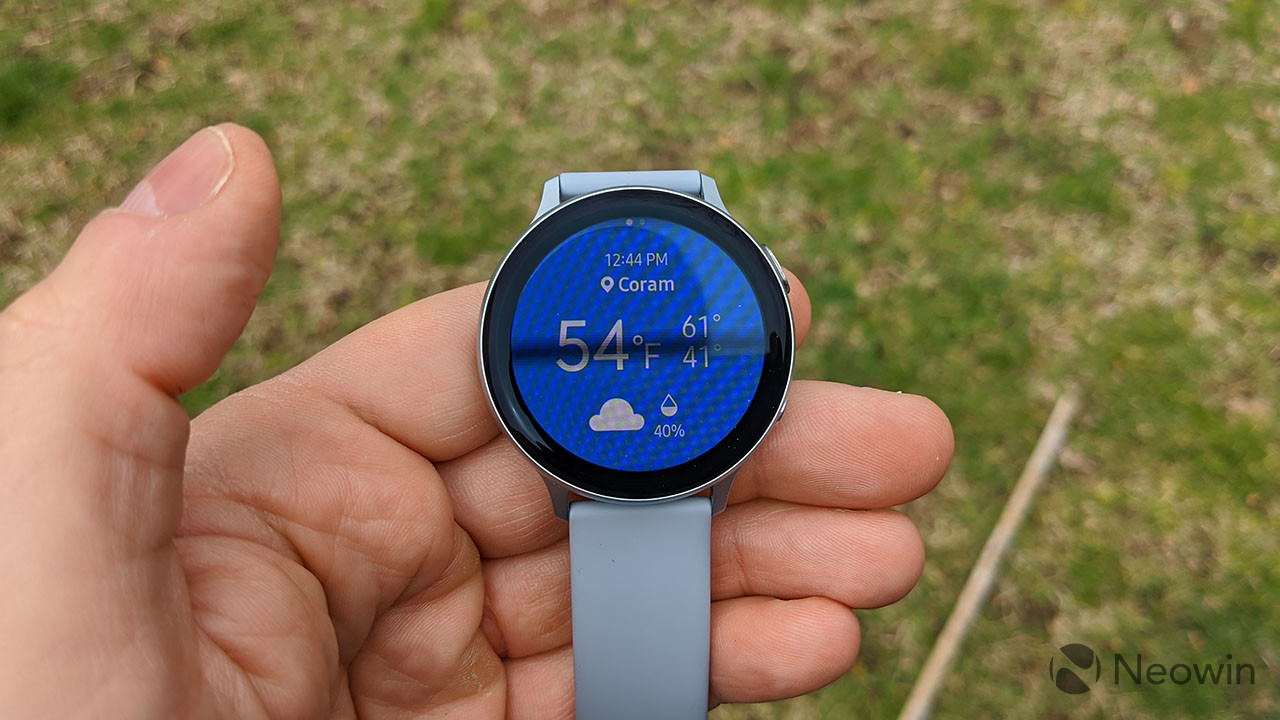 With a minimal design and a round chassis on the Galaxy Watch Active2, even the display is beautiful. It's a 360x360 Super AMOLED display, and if you've ever used a modern Samsung flagship smartphone, then you know how pretty its Super AMOLED screens are. The colors are vibrant, and the pixel density doesn't show any pixelation.

This is the 44mm version too. It's worth noting that the 40mm model is also 360x360, so it does have a higher pixel density.

Tizen picks up the slack left by Wear OS. I was always skeptical about Google's non-Android smartwatch efforts, because of a lack of Google services. It's actually pretty great though, and it's the first round smartwatch I've used that doesn't feel like a square peg in a round hole. 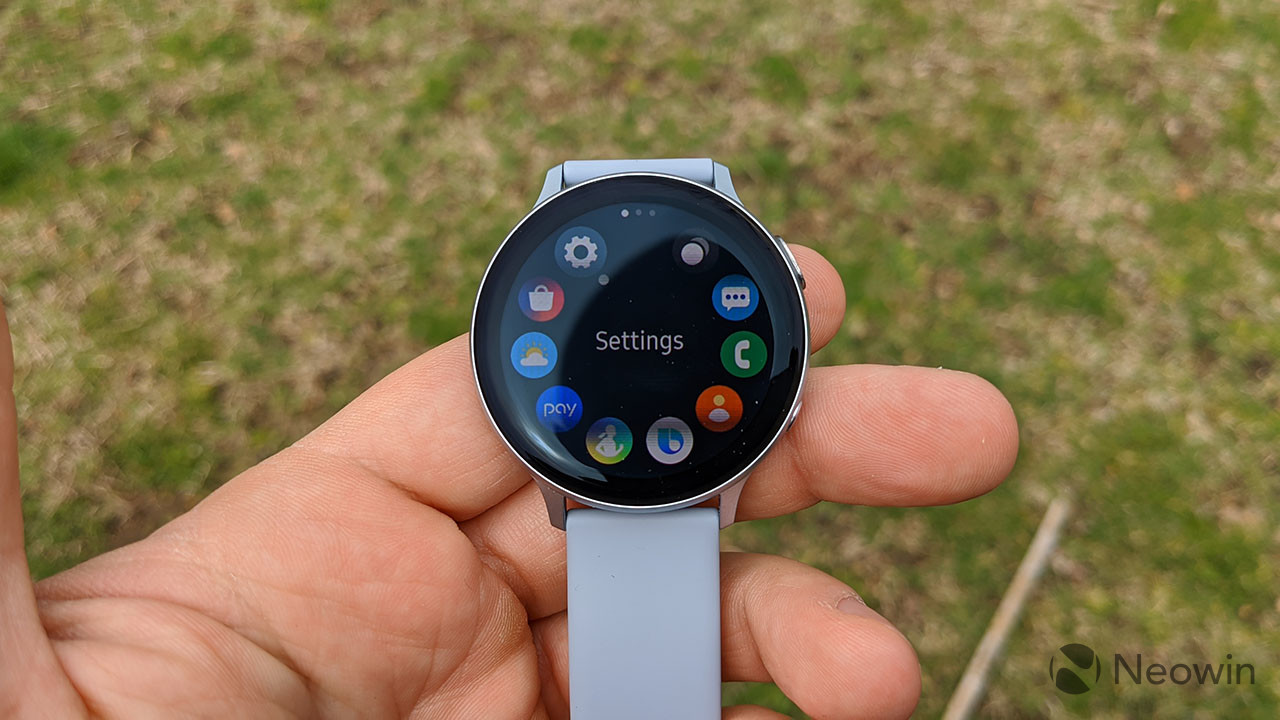 The app selection screen displays icons in a circle, and you can scroll through them using the Touch Bezel. Samsung extended the touch area beyond the screen, letting you use the bezel for just that. You'll find multiple pages of app icons, as you can see from the three dots in the image above.

It's all pretty straightforward, although I found that it can get confusing to remember where an app is located. It's really not something that I access very much, so it's not a muscle memory thing like it would be on a smartphone. 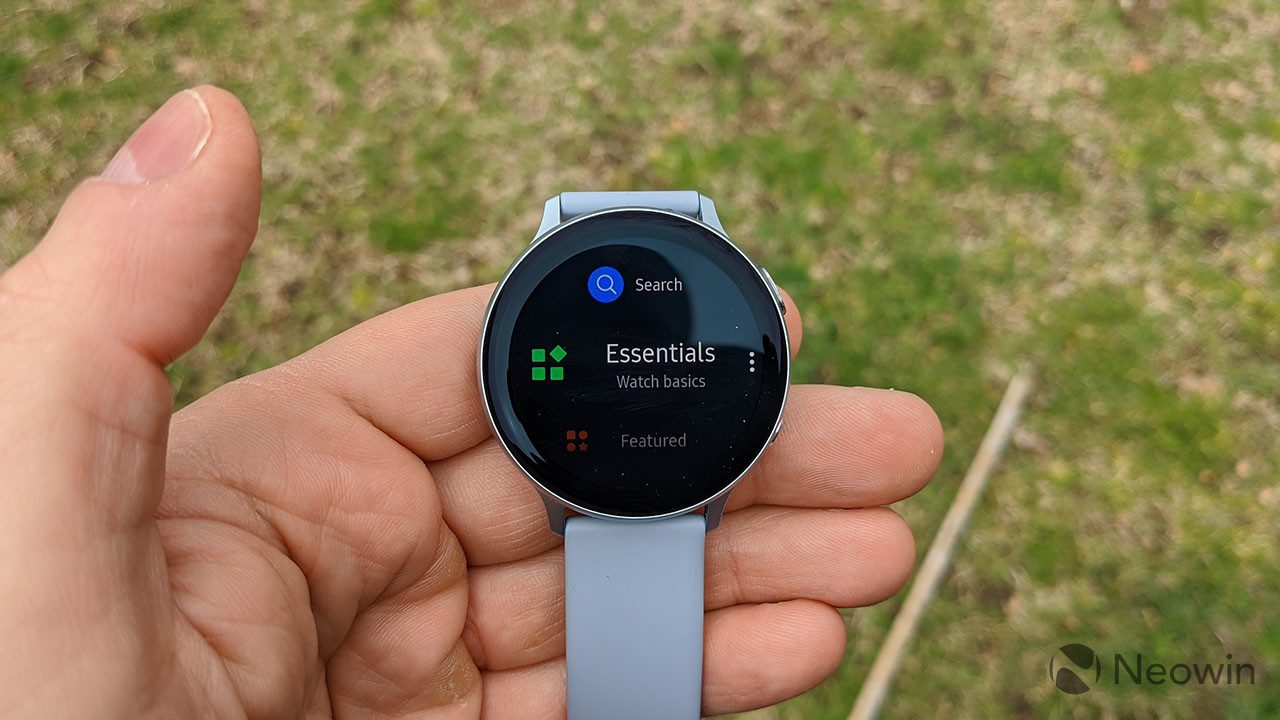 Samsung does have its own app store, something that's important in making this work with all Android devices, rather than just Samsung phones. Keep in mind that you will have to install some Samsung software on a non-Samsung device. It has a pretty wide range of apps too, which kind of surprised me. If you want GPS, there's no Google Maps, but you can use HERE Maps.

I'll also note that the app selection isn't quite as wide as Wear OS. I'm OK with that though. It has the apps that I need on a smartwatch. 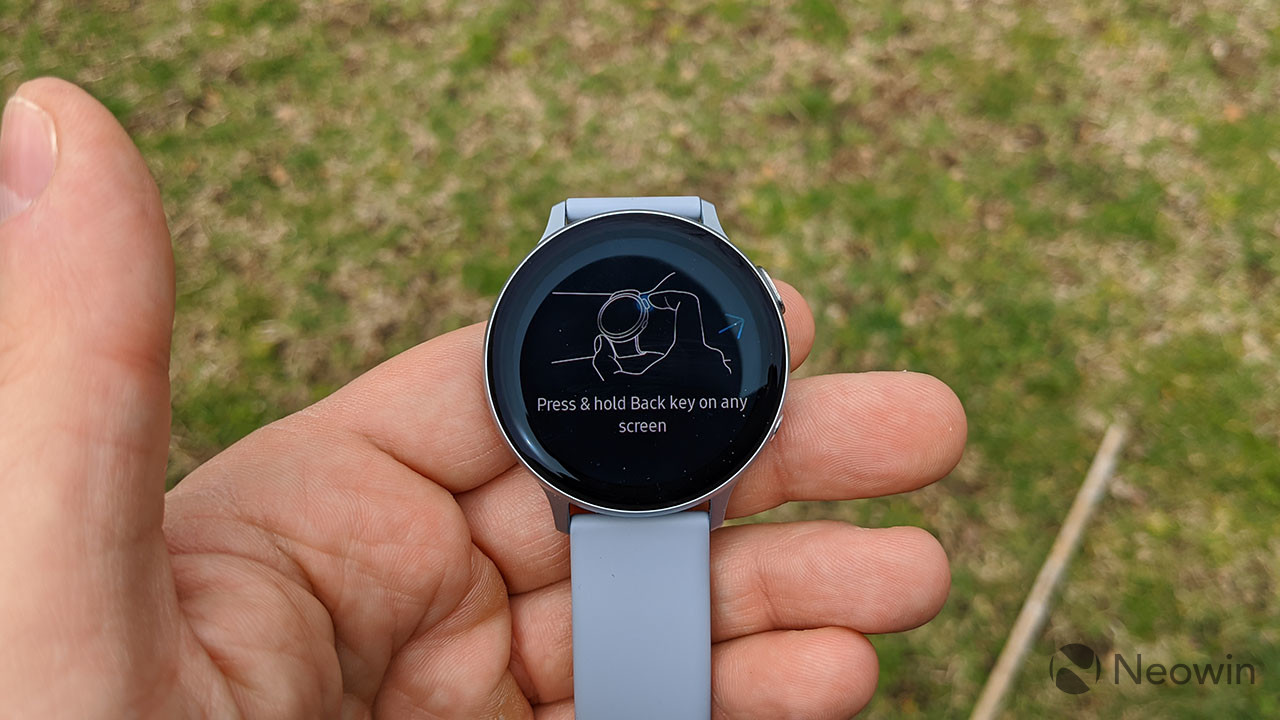 And of course, you get Samsung Pay. Here's the bad news though. It's lacking the best feature of Samsung Pay, which is the ability for it to work with magnetic strip terminals. Unfortunately, this only works with NFC.

One thing that I found strange about Samsung's smartwatch implementation is that it doesn't automatically turn on notifications for new apps. I grew to appreciate this though, not getting slammed with notifications whenever Best Buy is having a sale or when OneDrive wants to tell me that it's uploading a file. Notifications should be opt in, rather than opt out.

What really impressed me about Samsung's OS though is just how fluid everything feels. The animations are smooth, things feel snappy, and there's even a little "Good morning" animation when you first take it off the charger when you wake up.

This isn't the feeling that I get with Wear OS, which is often inconsistent and wonky. I'm always impressed with Wear OS hardware from companies like Fossil, but on the software side, it always feels like it's lacking.

Both performance and battery life are another reason why I love the Samsung Galaxy Watch Active2. It uses a 1.15GHz dual-core Samsung Exynos 9110, so it's not using an off-the-shelf Qualcomm part. And let's not forget that Wear OS smartwatches have been using what's essentially the same chip since the platform was introduced in 2014.

No, really. The first Android Wear smartwatches shipped with a Snapdragon 400, a chipset made for lower mid-tier smartphones. It was a quad-core ARM Cortex-A7 chip, as was Qualcomm's first wearable chipset, the Snapdragon Wear 2100. The current generation, the Snapdragon Wear 3100, is also Cortex-A7. There have been some minor improvements over that time, but the architecture remains the same. 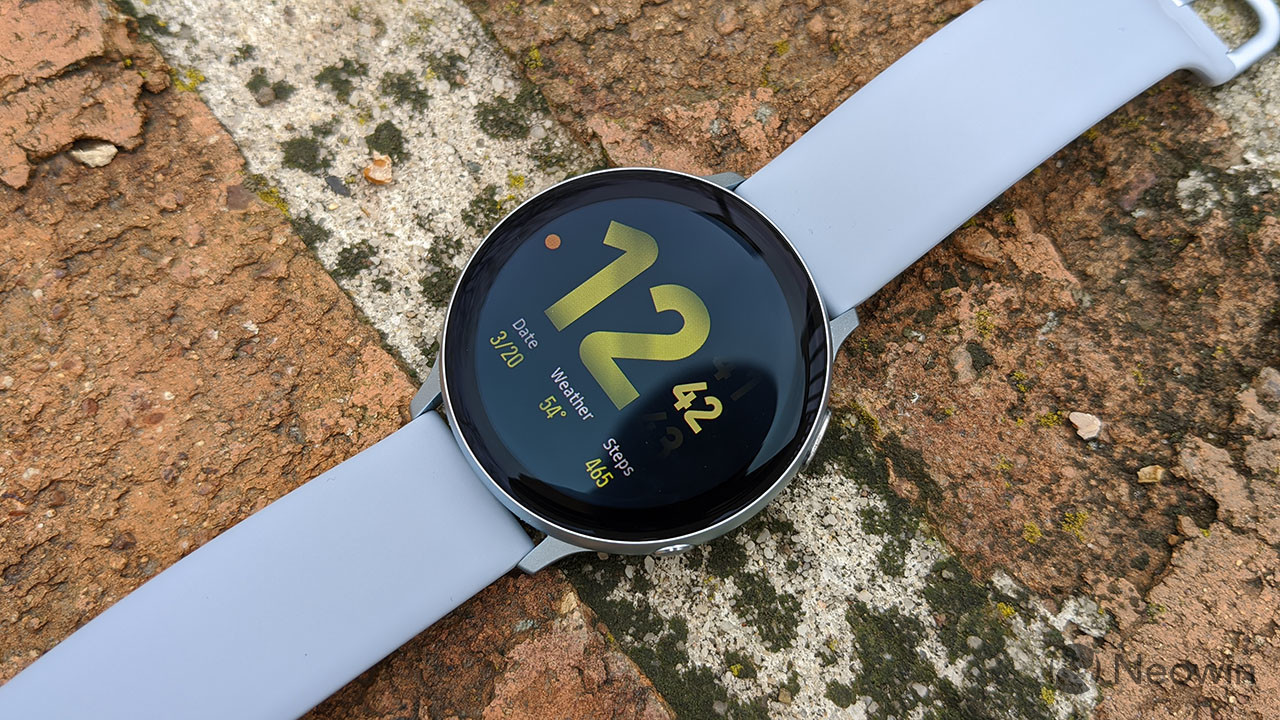 The Exynos 9110 is Cortex-A53, a massive performance improvement over Cortex-A7. This is the chip that Qualcomm should have made, frankly, a while ago. It's also 64-bit, while the Snapdragon Wear 3100 is still 32-bit.

As I mentioned above, everything on the Galaxy Watch Active2 just feels smooth, and I kind of love it.

Battery life didn't disappoint either. I found it to be on par with an Apple Watch, which is really saying something. You can easily stretch it to two days if you want, although I just charge it overnight.

As I said right in the title, this is what Wear OS should be. If only Google and Qualcomm put as much into Wear OS and Snapdragon Wear as Samsung did into Tizen and Exynos, the Android smartwatch ecosystem would be a better place. But luckily, we do have Samsung for that. 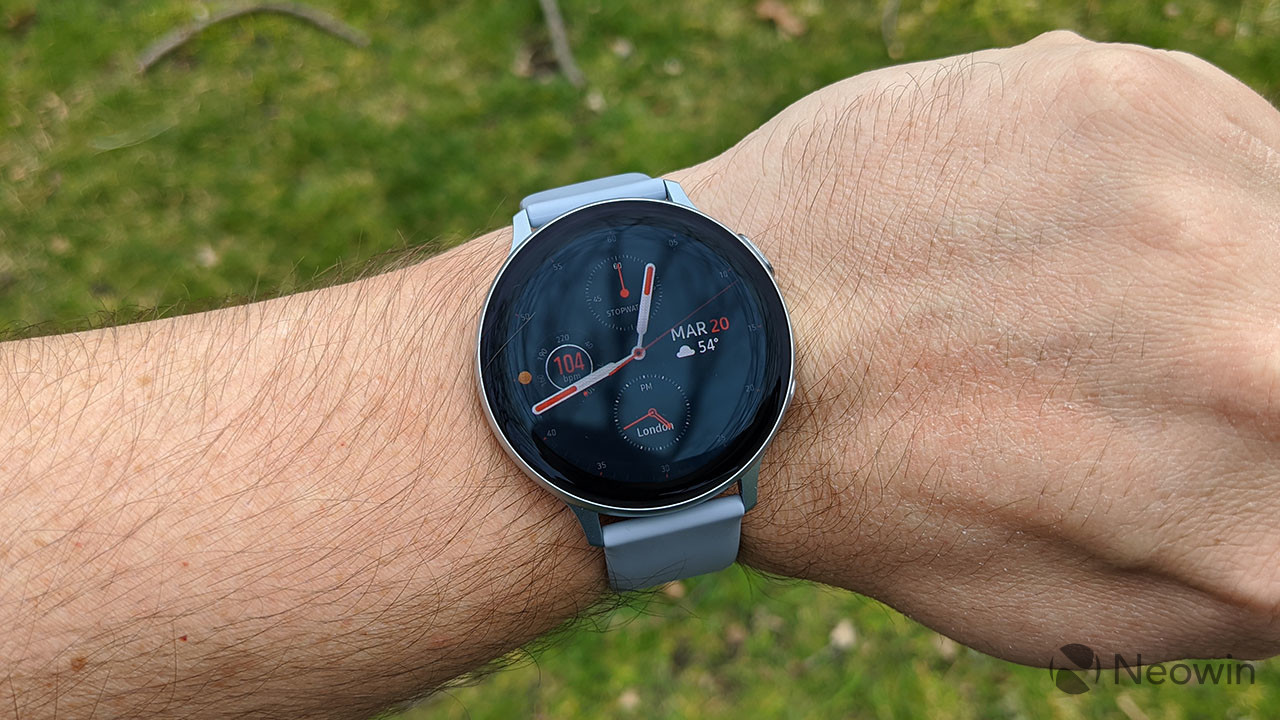 Not only do I enjoy the software, but I love the hardware. This is a sexy smartwatch, with a minimal aluminum chassis and a stunning curved glass Super AMOLED display. And if you want to go for something that's even sexier, go for the shiny stainless steel model and make use of cellular connectivity and double the RAM.

My two main issues are that the app selection isn't quite as wide as that of Wear OS, and that Samsung Pay doesn't support Magnetic Stripe Terminal. Seriously, that's the best part of Samsung Pay in general, and with Samsung phones, it's enough to make me comfortable with leaving my wallet at home. If it was on the watch, I'd be able to do the same with another Android phone.

I think that the Samsung Galaxy Watch Active2 is a solid buy. If you're looking for a smartwatch to use with an Android phone, this is the one to get.