Like many other leading tech brands, Samsung is in Berlin this week, showing off some of its latest and greatest devices at the IFA consumer electronics trade show. Today, the company unveiled its new Gear S2 smartwatch - but it ended that event with an unusual hint of what's still to come. 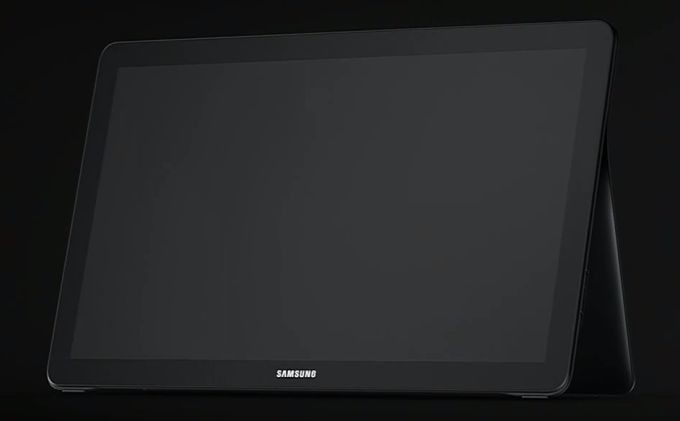 As the event drew to a close, Samsung dropped in an unexpected teaser, showing off a device called the 'Galaxy View'. At first glance, this looks like just another addition to the company's already-enormous range of Galaxy handsets and tablets - but there may be a bit more to it than that.

For a start, the device appears to have a rear kickstand - although before you get too carried away making comparisons with the Surface tablet range, it's worth noting that the kickstand on the Samsung device appears to use a somewhat different design to Microsoft's. Coupled with the device's name - 'View' - one might infer that the tablet is designed to spend much of its life propped upright while being stared at, rather than in your hand or on your lap.

Those aren't the only clues we have to go on. As Liliputing reports, in Samsung's teaser video for the device today, the company encouraged those watching to 'think big, and then think bigger'. Join the dots, and there's a good chance the Galaxy View is the same as a rumored device known by its development codename, 'Tahoe'.

This certainly seems like a likely candidate for the device that's now been previewed as the Galaxy View - but even if these details are accurate, there's still plenty we don't know. What exactly is this device designed for? Is it perhaps intended purely for watching movies and TV shows around the house - and if so, will Samsung customize (or even limit) the UX around that? And how much will this thing even cost?

These questions - and many more - remain unanswered for now, but we'll know more when Samsung formally announces the Galaxy View next month.