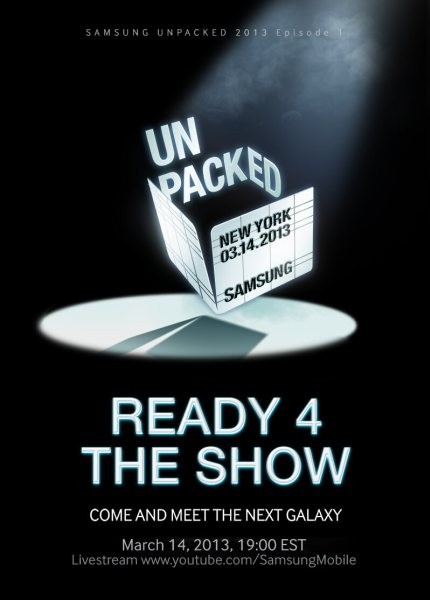 While not really announcing or launching anything major at Mobile World Congress, Samsung has just managed to make everyone pay attention to them. The company just announced their next Galaxy S IV phone would be launching on the 14th of March, confirming earlier rumors.

The company announced the upcoming event on Twitter, releasing the picture above. The reveal of the new phone is one of the most important events in upcoming months due to Samsung's domination of the Android space. The upcoming Galaxy S IV will also go head to head with Apple's iPhone 5 and their upcoming iPhone 5S or iPhone 6.

The biggest rumors relating to the new phone are about a brand new 1080p display as well as a custom made 8-core Exynos processor. According to these same rumors the Galaxy S IV will first launch in Europe and then come to the US afterwards, similar to the Galaxy S III launch. However that is still just speculation and the truth along with further details will be revealed at the event.