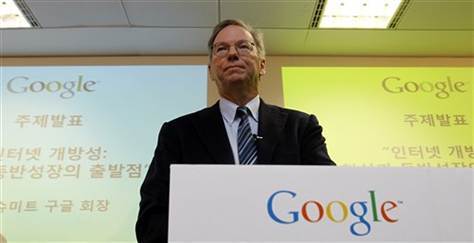 Former Google CEO and now Executive Chairman Eric Schmidt told reporters at a press conference held earlier today that Google is committed to the openness of their Android OS. Schmidt is on tour in South Korea. Schmidt said that Google's purchase of Motorola Mobility “will not violate the openness of Android.” The purchase has raised some questions as to whether or not Google will treat other manufacturers who use Android software in the products equally with their own offerings.

Schmidt also took time to take a potshot at Microsoft. Referring to Microsoft's patent litigations against several smartphone makers, including Samsung. Schmidt said that Microsoft “is not telling the truth on the issue, and they are using tactics to scare people because they are scared of the success of Android.”

Schmidt said that he had decided not to comment on remarks Steve Jobs made to biographer Walter Isaacson after the former's death in early October. “[Steve was a] fantastic human being. Most people would agree that Google is a great innovator, and I would also point out that the Android efforts started before the iPhone efforts.”

According to Jobs, “Google... f***ing ripped off the iPhone, wholesale ripped us off. I will spend my last dying breath if I need to, and I will spend every penny of Apple's $40 billion in the bank, to right this wrong. I'm going to destroy Android, because it's a stolen product.”

Schmidt praised South Korea's internet infrastructure. 90% of households there have broadband access. In the US, that number is closer to 65%. Schmidt urged South Korean President Lee Myung-bak to trim down the country's internet regulations. “It is my view and, I think, Google's view that the regulation of internet in Korea could be more open, more modern.”

Google does not allow South Korean users to post videos on YouTube in protest of a policy that mandates that real names must be used in website sign-ups, although there are no regulations on viewing video. Many South Korean users signup with fake nationalities.

This is the first time Schmidt has spoken to the South Korean President since 2007. He'll be heading to Taiwan next.