IDC this week published their quarterly mobile phone market share statistics and found that while Apple was gaining new ground with their iPhone, Nokia still held the majority of shipments worldwide to gave them a 39.3% market share.

Like last year, Nokia remained strong in holding the title as the top smartphone vendor by shipping over 21 million units for the quarter. RIM also held their position at second place.

While Apple came in at third, they more than doubled iPhone shipments from last year (131% change) and grasped about 16% of the market (up from 11% last year). RIM’s second place position might be in jeopardy soon as Apple plans to further increase their penetration with the release of the next iPhone and OS 4 this summer.

HTC and Motorola respectively took the 4th and 5th places in the market with strong growth rates originating from their successful Android-powered phones; both companies saw an increase in market share from the same quarter of last year. 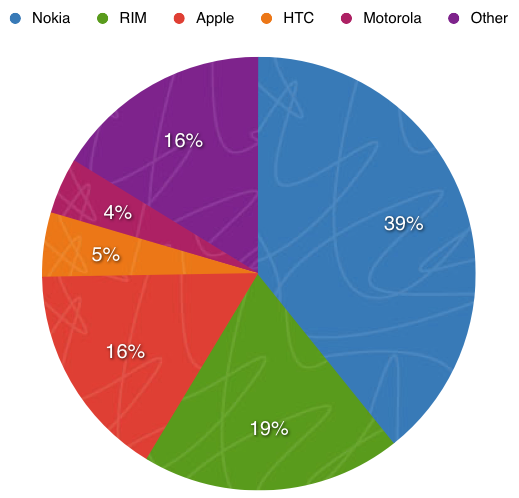 The market research firm found that the smartphone market was increasing at a high pace once again, with a growth rate twice that of regular phones. The increase in growth rate of 56.7% from the same quarter of last year brought in a total of 54.7 million phones shipped in 1Q 2010.

"2010 looks to be another year of large-scale consumer adoption of converged mobile devices," says Ramon Llamas, senior research analyst with IDC’s Mobile Devices Technology and Trends team. "Consumers will gravitate to smartphones not just because the devices themselves look 'cool' and 'slick', but because the overall experience aligns with their individual tastes and demands. Users are seeking – and finding – experiences that are intuitive, seamless, and fun. Already, we've seen what Palm's webOS and Google's Android can do. This year, we expect updates for BlackBerry, Symbian, and Windows Mobile to spark greater smartphone demand with their offerings.”