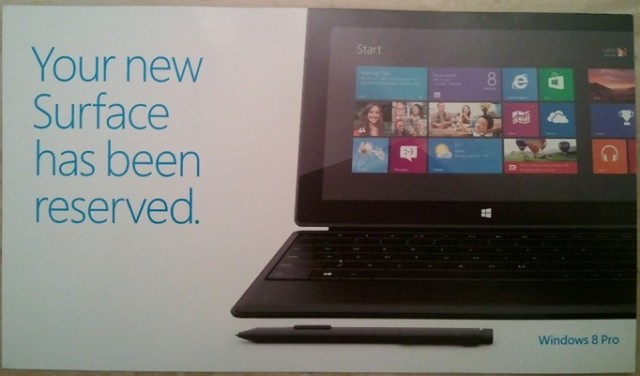 With Microsoft prepping to launch the Surface Pro tablet in North America on February 9th, the folks who happen to live near a Microsoft Store retail location will be one of the first to actually get their hands on the Windows 8 Pro device. While Microsoft has still not announced any pre-order plans for the Surface Pro, it appears that people who go to their local Microsoft Store site will get a chance to reserve their place in line.

WPCentral.com got word from a tipster that at least some store locations are offering a reservation card. The card will guarantee that the person holding it will be able to buy a Surface Pro tablet on February 9th as long as they show up at the store before noon.

Microsoft did something similar for the launch of the Windows RT version of the Surface in October. The company also offered folks a way to get a free one year subscription to Xbox Music Pass, valued normally at $99.90, if they were among the first 100 people in line at their local Microsoft Store to buy the Surface RT tablet. So far, there's no word if Microsoft will have a similar incentive for the Surface Pro launch.