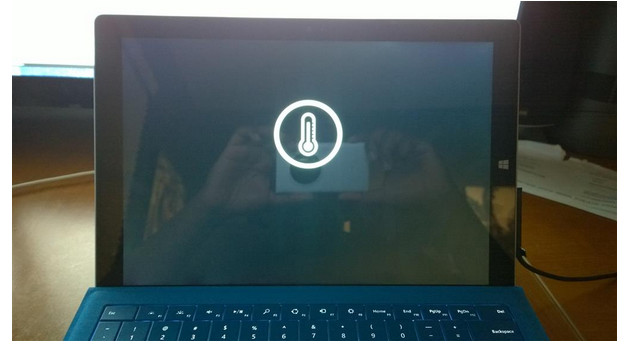 Microsoft now sells the Surface Pro 3 in Core i3, i5 and the top-of-the-line i7 configurations. At the top end of the scale, the Pro 3 can run up to $2,000 for a fully equipped device. During our time with the i5 model, we quite liked what the Pro 3 has to offer, as it is generally a great machine. But some users who have the i7 models which started shipping at the start of August are reporting that they have excessive heat issues.

How hot? Well, hot enough to throw a Pro 3 in a safety mode where it shuts everything down until the device cools off, as shown in the image at the top of this post. The overheating is far from an isolated case as one users is saying that they have had four different units exhibit the excessive heat and based on the thread in the Microsoft Answer forums, they are not alone. A friend of Neowin, Romit Mehta, tipped us off to the high heat output after his unit started exhibiting the heat issues.

The i7 is Intel's high-performance line of CPUs, and it's not a surprise that the machines do run warmer than their i5 and i3 counterparts, but running so hot that it shuts the machine down is well beyond the intended heat of expected operation. The support thread linked at the bottom of this post has numerous users reporting that the fan runs an excessive amount under light use and that their machines get warm to the touch.

Our i5 unit rarely has the fans spin up under normal use; the fans only kick in high enough to be heard when the machine is installing updates from Microsoft. Seeing how widespread the issue is with the i7 chips, it does appear that there may be a problem with some of these high-end devices.

It is worth pointing out that not all i7 machines have this issue, so it could be a case where a bad batch of units is the cause for the high heat output. So far, there is no fix for i7 users whose devices run hot, but we will keep monitoring the situation to see if Microsoft provides an update that addresses the concerns of these users.