One of the most popular gaming characters of all time will soon be the star of his own Hollywood movie. Sonic the Hedgehog is heading to the big screen, in a film being developed by Sony and Neal Moritz, producer of movies including I Am Legend, 21 Jump Street, and the Fast and the Furious series, as well as TV shows such as Prison Break and Tru Calling.

According to The Hollywood Reporter, the Sonic movie will combine both computer animation and live action, perhaps in a similar style to the hybrid live/animated Smurfs movies, which were also produced by Sony. It will be made in collaboration with Japan’s Marza Animation Planet, part of the Sega Sammy Holdings group.

Hannah Minghella, president of production at Sony’s Columbia Pictures, said: “There are limitless stories to tell with a character like Sonic the Hedgehog and a built-in international fan base. Along with our wonderful creative partners at Marza, we’re looking to capture everything that generations of fans know and love about Sonic while also growing his audience wider than ever before.”

While details of the plot have not yet been revealed, Sonic is expected to battle with his nemesis from the game series, the evil Dr Eggman (aka Dr Robotnik), while other characters from the franchise, such as the hedgehog’s sidekick, Tails, may also appear. 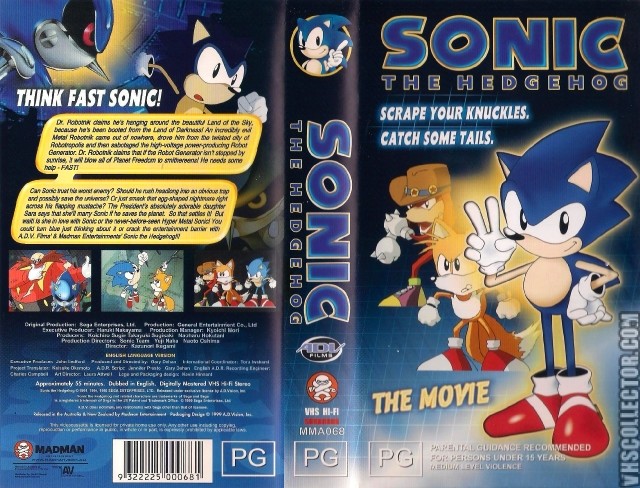 Sonic has starred in a long list of his own games, and even enjoyed fame on the small screen with numerous TV series. But the new big-budget film will not technically be his first movie – in 1999, ‘Sonic the Hedgehog: The Movie’ got a straight-to-video release in the US, stitched together from a two-episode anime mini-series released in Japan in 1996.

Source: The Hollywood Reporter via The Verge | upper image via iGoGaming; lower image via VHS Collector