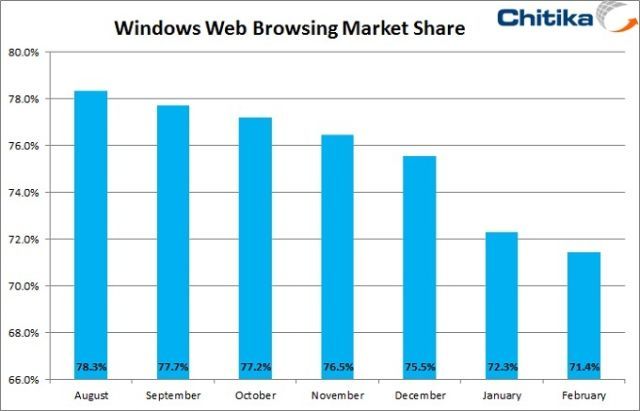 The number of people accessing the web via Windows-based PCs is dropping quickly, according to a new study from Chitika Insights. The company announced today, via a blog post titled "Demise of the PC?" that according to its research results, web browsing via Windows-based platforms has dropped from 78.3 percent in August 2011 down to 71.4 percent in February 2012, a drop of nearly 10 percent in just six months.

Indeed the study claims that the number of Windows-based web browser users dropped a massive 4.2 percent just between December 2011 and January 2012.

The study was based on examining data "from hundreds of millions of impressions from the Chitika Ad network." The company has also been examining the web browing habits of smartphone and tablet owners. Last week, Chitika Insights reported that its research shows that the number of web browsers on Apple's iOS devices surpassed those of its Mac platform. The study shows that iOS web browsing activities now takes up 8.15 percent of all users of web browsers compared to 7.96 percent of Mac OS users.

If these results are indeed accurate, it does seem that more and more web visitors are checking out their favorite web sites on their smartphone or tablet rather than sitting at a PC. While there's still a lot of PC web users out there, we could see even more drops in Windows-based web surfers in the coming months.