Both Symantec and McAfee are in an 'Arms Race' in the PC security market according to a report by The New York Times.

McAfee has been trying to dethrone Symantec, which currently holds 52% of the consumer market share compared to McAfee's 18% market share. This market share varies when you include corporate and business use. Unfortunately, for McAfee, they've been facing a decade of legal and accounting problems that left it in poor competitive shape, and employee morale low. Things aren't any better in the revenue department. Symantec made $1.8 billion in revenue last year, compared to $624 million in revenue for McAfee.

However, McAfee is fighting back. They've been aggressively trying to get deals with PC makers, and now that the company has David G. DeWalt as the new head of sales, they have expanded beyond anti virus software, acquired some security players and increased sales to consumers and large businesses. HP, the world's largest computer seller, currently has an exclusive deal with Symantec on its consumer PC's, but Mr. DeWalt said that deal could be up for bid within the next year.

"They didn't have much competition back then, but they will this time.", says Mr. DeWalt. However, Enrique T. Salem, the chief executive of Symantec, shrugged off his statement. "I love the rhetoric and the chest-pounding," he said.

However, both companies have been fighting off competition from free alternatives like AVG, Avast, and Avira. Just recently, Microsoft released a beta of their new Security Essentials software that includes anti-virus protection. Just recently, Symantec made a statement claiming that it's dangerous to rely on free antivirus. 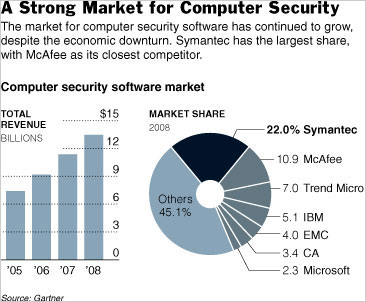