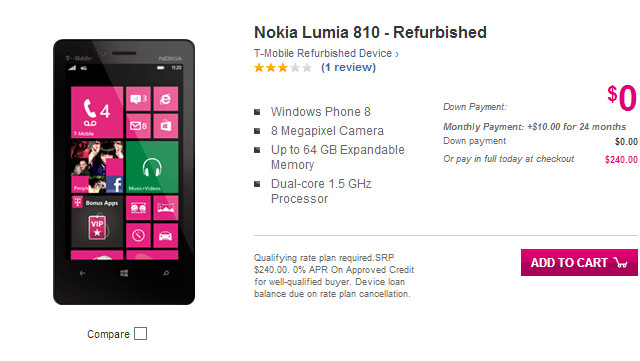 In November, T-Mobile started taking orders for its version of the HTC Windows Phone 8X and the Nokia Lumia 810, which was a T-Mobile exclusive. Now, just six months later, T-Mobile is no longer selling any new Windows Phone devices on its website.

A check of the site shows that the only Windows Phone model available for the fourth-biggest wireless carrier in the U.S. is a refurbished version of the Nokia Lumia 810. By contrast, Verizon Wireless is selling new units of four Windows Phone devices on its website and AT&T is selling seven new smartphones with Microsoft's mobile OS.

It's likely that T-Mobile has decided to discontinue new sales of its two Windows Phone products simply because they were not selling well enough. However, the wireless provider is scheduled to sell the Nokia Lumia 521, an exclusive variant on the Lumia 520, sometime in May.

T-Mobile recently launched its new "no contract" program for new smartphones, allowing customers to pay up front for a smartphone or have the cost of the phone paid out over 24 months. It also officially began selling Apple's iPhone for the first time earlier this month.