Although the Nvidia GeForce 400 series has been out for about 2 months now, it would seem the jury is still out on whether or not the series is a success. Some will tell you the GeForce GTX 480 is a power-hungry expensive GPU that failed to deliver, while others claim it lived up to the expectations as the world’s fastest single GPU graphics card and that power consumption figures are for sissies.

While we feel the truth might lie somewhere in the middle, it is time to take another look at the Nvidia GeForce GTX 480/470 vs. ATI Radeon HD 5870/5850 comparison. 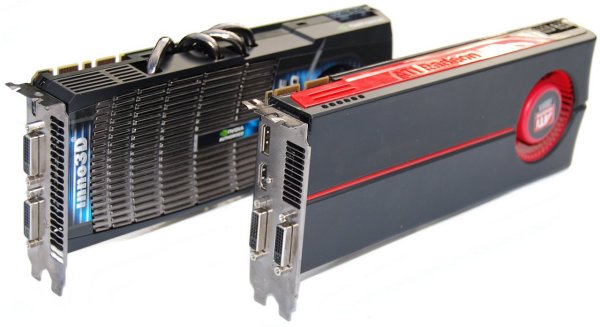 We also wanted to revisit this high-end graphics card battle to settle a belief of the green team fans that the GeForce GTX 480 is far superior to the Radeon HD 5870 when measuring minimum frames per second. This is an interesting argument as the average fps results did not suggest a huge difference in minimum frame rate performance when we last tested, though it could be possible and therefore we wanted to find out if this were true or not.