App reveals for Windows Phone 7 have been coming in at a slow and steady pace for about a month now. Telstra appears to be continuing that trend today. They have officially revealed their Windows Phone 7 App suite.

While Telstra may have a history of adding their own little touches (no pun intended) to an interface, this time around they appear to be playing mostly by Microsoft’s UI rules. They just recently revealed their Windows Phone 7 suite of Apps at Microsoft Tech Ed. 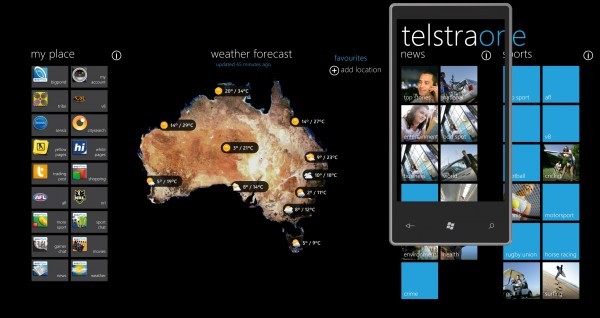 According to Lifehacker, “I had a brief play with an early version of Telstra’s Windows Phone 7 suite at Microsoft’s Tech Ed conference on the Gold Coast. Seducing developers into producing applications for Microsoft’s next version of Windows for phones is a major agenda item at the conference.”

The Telstra App suite covers common everyday tasks – including news, weather, and links to other Telstra functionality such as white pages and trading post. Lifehacker states that when they tried the demo of the suite, many of the links weren’t working yet, but the scrolling was working very smoothly and it came very close to the overall Windows Phone 7 Tile experience.

Microsoft definitely has a long road ahead of them with trying to get Developers to create compelling Apps for the platform – they have to compete with the likes of iPhone and Android. However, it appears that they are definitely on the road to a compelling experience this time around.