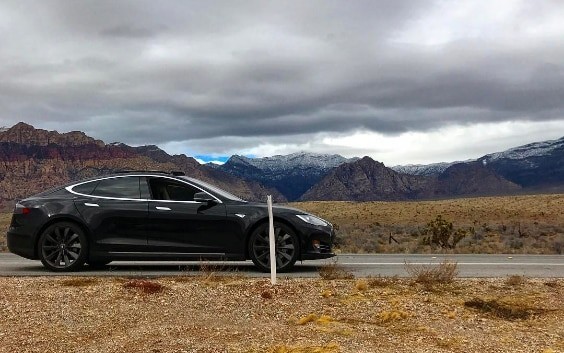 An enthusiastic Tesla driver last week decided to test out his vehicle's keyless driving feature. The system, which allows you to unlock the car and start its ignition using the Model S smartphone app, is designed to allow drivers to access their car and drive it away even if they don't have the key on hand.

The unfortunate driver, who lives near Las Vegas, took his wife and two dogs for a drive out into the desert toward Red Rock Canyon to test the feature, and about six miles from home decided it was time to turn the car around and head home.

However, during the turnaround, he made the mistake of getting out of the car to adjust his dogs' bed, killing the engine in the process. He soon realised his mistake, however, because his smartphone no longer had any signal, meaning that he couldn't start the car, or even unlock it.

The Tesla system which controls remote unlocking and keyless starting relies on the company's smartphone app. It connects back to Tesla's servers to issue commands, and likewise, the car needs data service itself to receive commands from those same servers to unlock or start, so needing to start the car with no phone signal, the driver really was up a creek (or a canyon in this case) without a paddle.

The driver posted the mishap on Instagram with the above image, explaining that eventually in order to get the car started, his wife had ran 2 miles to get phone signal:

@amymnegri, the hero she is, started running to reach cell service height. After about 2 miles she reached signal and called a friend for a ride to the house to grab the key fob.

He goes on to explain in the post that he won't be driving the car in the future without the key that in his own words "will always be with me (now) when I drive that car".

In more positive news for Tesla, one of its vehicles recently preempted a crash whilst driving in autopilot mode, attracting praise from both the technology and motoring communities.