Back in 2009, Microsoft introduced the “Browser Ballot Screen” to keep the European Commission (EU) happy following anti-trust violations. The EU was happy with at this point and the ballot screen was pushed out via Windows Update to XP and Vista and Windows 7 in 2010. When Windows 7 was released, the ballot choice was notably, but in most cases thankfully absent. 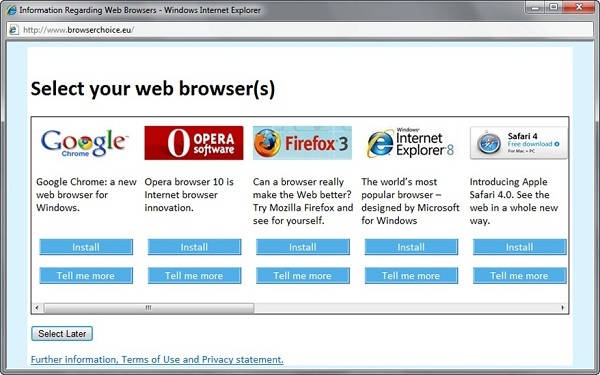 Now the EU is charging Microsoft with not providing that choice for users of the Windows 7 OS from launch. Microsoft acknowledged the “technical error” that caused the choice to be absent from the OS, but not before the EU picked up the issue. In July the EU said that Microsoft had not complied with their order from February 2011.

It was announced at the start of September that Microsoft would be introducing the Browser Ballot Screen in Windows 8, much to the disdain of a number of users. If fined, Microsoft could have to hand over up to 10% of their global turnover.

[Update] It's been pointed out in the comments, and rightly so that neither Apple or Google are under any pressure to add a similar screen into their OS. OS X and iOS have Safari as standard and Android, on phones, tablets and Chromebooks have Chrome. While yes, Microsoft could be creating a monopoly in the browser market, it's hardly their fault that 90% of the OS' installed are Windows. It's also common knowledge that users are more than able to download and install another browser, if they so wish.

Microsoft are almost victims of their own success; Android resides on more than 50% of smartphones, but we can't see them getting a browser ballot screen. The same goes for the iPhone, with more than 30% of the market. So if Microsoft has to introduce this into their Windows OS for desktops and laptops, why not the Windows Phone OS? At the moment, Windows Phone only controls around 5% of the mobile OS market, so is there a certain figure that you need to hit before you're being hauled over hot coals and accused of anti-trust violations? Google and Apple, let this be a warning to you both.