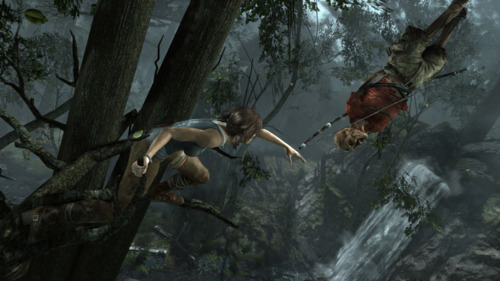 Lara Croft's gaming reboot is going to take longer than first thought to be released. Today on the official Tomb Raider blog, Darrell Gallagher, the head of the game's developer Crystal Dynamics, announced that the next Tomb Raider game wouldn't be released in the fall of 2012 as originally planned. Instead, it is now due out in the first quarter of 2013.

We’re doing things that are completely new to Tomb Raider in this game and the additional development time will allow us to put the finishing touches into the game and polish it to a level that you deserve. We believe this is the right choice and I guarantee it will be worth the wait.

The game will get a live demo in a few weeks at E3 2012 in Los Angeles as part of publisher Square Enix's line-up of upcoming game titles. In the meantime, you can check out a new screenshot from the game above this post.

First announced in December 2010, this new game will revamp the long running and popular action-adventure franchise as we see a younger and inexperienced Lara Croft on one of her first adventures. It's destined for the PC, Xbox 360 and PS3 platforms.