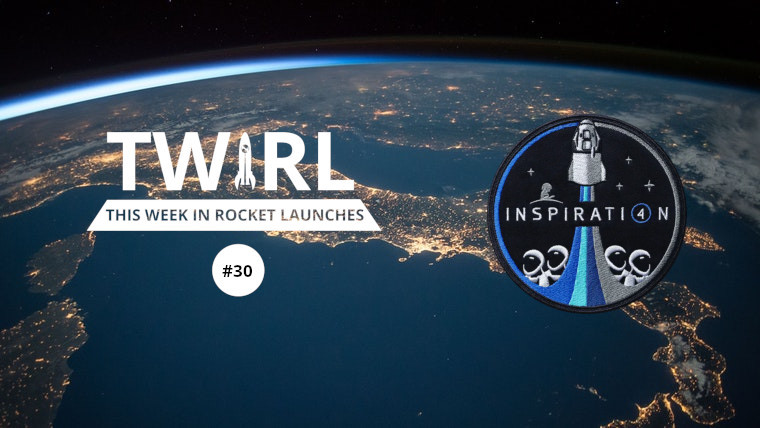 After a boring last two weeks in space launches, this week promises to be a lot more interesting. The main focus is the Inspiration4 Crew Dragon mission set to launch in the very early hours on Thursday (UTC, Wednesday local time) carrying pilot Jared Isaacman and three civilian astronauts; Hayley Arceneaux, Sian Proctor, and Chris Sembroski. Unlike Jeff Bezos’ trip to space, the Inspiration4 crew will stay in Earth orbit for several days before coming back to Earth.

The first launch of the week will come from SpaceX, which is launching a Falcon 9 Block 5 rocket from Vandenberg AFB. The rocket will carry 60 Block 1.5 Starlink satellites that are equipped with laser com terminals. The satellites will join the Starlink constellation and provide internet to subscribers on Earth. This launch should be available on the SpaceX website after it has taken place or as a live stream on its website during the event.

The second launch will be a Long March CZ-2C taking off from the Jiuquan Satellite Launch Center. It will be carrying two satellites with the designation Yaogan 32 Group 02. It’s unclear what the purpose of the satellites is but they’re reportedly going to perform signals intelligence work. The launch was delayed from September 12 but hopes to launch at 7:45 a.m. UTC on the 13th.

On Tuesday, the private French-Russian company Starsem will launch a Soyuz 2.1b rocket with a Fregat upper stage carrying 34 OneWeb internet satellites to Earth orbit. This mission was delayed from August 26 and September 9 so, hopefully, the mission will succeed this time. OneWeb is a competitor to SpaceX and has already announced plans to beam internet to commercial flights and the Canadian military.

On Wednesday evening, but Thursday morning (1:01 a.m.) on Universal Coordinated Time, we’ll see a SpaceX Falcon 9 Block 5 rocket take off from Florida carrying the Crew Dragon spacecraft containing a crew of four. The Inspiration4 mission will see pilot Jared Isaacman and three civilian astronauts spend about three days in Earth orbit before returning to Earth. Isaacman is joined on the mission by Hayley Arceneaux, Sian Proctor, and Chris Sembroski. When the crew comes back to Earth, they will splash down in the Atlantic Ocean near Cape Canaveral.

The final mission of the week will launch from Jiuquan Satellite Launch Center. An ExPace Kuaizhou KZ-1A rocket will launch carrying the Jilin Gaofan 2F satellite. It will join the Jilin 1 Earth observation constellation which is run by Chang Guang Satellite Technology Company and is the 20th satellite to join the constellation. It will capture full-colour images down to 0.76 meters over a swath of 40km.

Last Tuesday at 3:01 a.m. UTC, a Long March 4C carrying the second Gaofen 5 satellite launched. It will be using instruments to observe the atmosphere and measure greenhouse gas emissions, trace gases, and more.

On Thursday, a Long March 3B launched the Zhongxing 9B satellite into orbit to replace the Zhongxing 9A satellite. The satellite is used for telecommunication and will help provide radio, TV and other services in China, Hong Kong, Macau, and Taiwan.

Also on Thursday, the Ministry of Defence of the Russian Federation launched a Soyuz 2.1v carrying the Kosmos-2551 satellite from the Plesetsk Cosmodrome. It will perform Earth observation tasks.