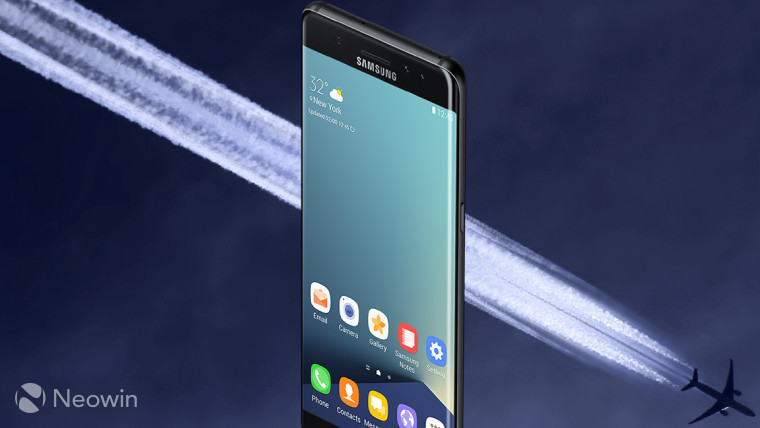 Earlier today, the Federal Aviation Administration delivered official guidance to US airline passengers, advising them to keep the Samsung Galaxy Note7 switched off in-flight, and to avoid charging the device onboard. The FAA's advisory notice came a day after three of Australia's largest airlines issued similar instructions to their passengers.

The FAA took longer than some had expected to issue its guidance - and indeed, its response would have been far quicker if Samsung had implemented official recall procedures with the US Consumer Product Safety Commission (CPSC). Instead, Samsung announced a less formal voluntary recall of its new flagship handset, following dozens of incidents in which the device caught fire, and some cases in which its battery exploded.

Independent group Consumer Reports criticized Samsung for failing to work with the CPSC, an independent government agency, as this had led to the handset remaining on sale through some retailers, even after the company's recall had been announced.

But this evening, Samsung issued a press release stating that it is working with the CPSC "on a voluntary corrective action plan to expedite a US recall of the product."

In a separate press statement, the CPSC said:

Lithium-ion batteries pack a lot of power into a small package. When these batteries overheat and burst, the results can be serious. This is why the U.S Consumer Product Safety Commission (CPSC) is urging all consumers who own a Samsung Galaxy Note7 to power them down and stop charging or using the device.

This consumer warning is based on recent reports involving lithium-ion batteries in certain Note7 devices that have resulted in fires. These incidents have occurred while charging and during normal use, which has led us to call for consumers to power down their Note7s.

As stated above, the CPSC is now formally advising all Note7 owners to immediately stop using the handsets, to switch them off, and to stop charging them. Contrary to some earlier reports - which suggested that the fiery incidents involving the Note7 occurred only during charging - the CPSC notes that some of those incidents actually took place "during normal use". The potential threat to user safety is therefore very clear.

The CPSC said that it is now working with Samsung "to formally announce an official recall of the devices, as soon as possible". Samsung said that it has now "identified the affected inventory and stopped sales and shipments of those devices".

For now, if you have a Galaxy Note7, the best course of action is to follow the guidance laid out by the CPSC and Samsung; to stop using the phone and power it down without delay. While it will inevitably be an inconvenience to be unable to use the handset while awaiting a replacement, Samsung has said that "in the interim, consumers can return their Note7 for another device".