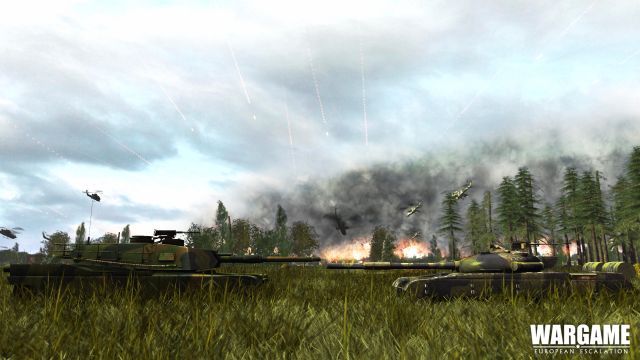 PC gamers will have a new military RTS game to check out in the next year from the team that delivered the 2010 title R.U.S.E. Publisher Focus Home Interactive just announced plans to release Wargame: European Escalation from developer Eugen Systems in the first quarter of 2011. The game itself is set in the time period of 1975-1985 in the heart of the "Cold War" between NATO forces and the Warsaw Pact.

The game will be set in a kind of alternate time line as it explores battles in Europe between the two main military forces during that time period. The press release states that the game will allow players to zoom out to see the battles from a global viewpoint and zoom in to see the battles up close and personal. While the press release brings up the specter of nuclear war during that time period there's no word yet if the game will actually feature nuclear weapons as part of its arsenal.

Eugen Systems was founded in Paris France in the year 2000. In 2005 it released Act of War: Direct Action via publisher Atari. That game was set in the near future as armies battled over the dwindling oil supply. In 2010, the developer released R.U.S.E. for publisher Ubisoft. That game brought in some differnet gameplay features to the RTS genre. Set in World War II the game allowed played to sent out decoy units and create deceptive situations in order to throw off the enemies. The reviews of the game were solid but Ubisoft has admitted that sales of the game did not meet expectations.