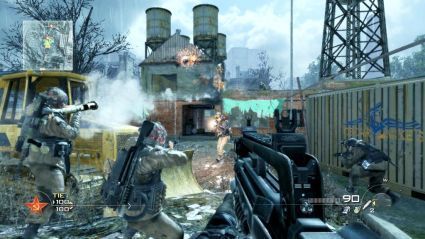 While Activision still hasn't officially announced Call of Duty Modern Warfare 3, rumors are flying on the Internet that claim to have the first info on the storyline, multiplayer maps, locations and more about the next game in the mega-selling first person shooter series. Kotaku is the main source of this info. The site claims to have learned details about the game from multiple inside sources along with select images from the game.

Kotaku's stories claim that Modern Warfare 3's storyline will be a direct sequel to the events in 2010's Modern Warfare 2 (shown above) where the US was invaded by Russian forces. Characters from the first two Modern Warfare games are slated to reappear in the game along with new characters that might star in future installments of the series. As far as multiplayer, another Kotaku article claims there will be 20 maps in Modern Warfare 3 in a variety of locations around the world. If you really want to have the game's entire plot spoiled, there's yet another Kotaku article that supposedly spills the beans on the entire storyline.

No matter what happens, this new game will be the first in the Modern Warfare series that will be developed without many of the people at Activision's internal studio Infinity Ward that created the first two games in the series. The two founders of the studio were fired by Activision over a year ago and many of Infinity Ward's team members left afterwards. Those people later formed Respawn Entertainment and signed a publishing deal with Electronic Arts for their first game which has yet to be revealed.

Update: Infinity Ward's community manager Robert Bowling took to his Twitter page saying that some of the info revealed about the game is accurate while others details are not. He did not get into specifics.