This week's new Humble Bundle brings along seven strategy and simulator games with Cities Skylines at the forefront for $10.

Starting off, paying any amount over $1 gets you Rebuild 3: Gangs of Deadsville, a zombie-based simulation title; Simple Planes, physics-based vehicle builder; and Out of the Park Baseball 18 for all your baseball management needs.

The next tier is currently just below $6 and adds on Mad Games Tycoon for managing your own game studio, the opportunity to craft the perfect pathogen with Plague Inc: Evolved, and Train Simulator 2017. While you don't get the almost $7000 worth of DLC packs that are available for the latter title, you do get Town and Platform Clutter scenery packs for purchasing this tier.

And as mentioned above, arriving in the bundle's final tier for $10 as perhaps its crown jewel is a copy of Cities Skylines Deluxe Edition. In addition to the base game, the deluxe edition arrives with five historical monuments for use in-game, as well as the original soundtrack and a digital artbook.

Celebrating the forthcoming holiday season, Ubisoft is giving away its open-world title from 2014, Watch Dogs, for the low, low price of free. The game is being given away exclusively on PC via Ubisoft's digital distribution platform, Uplay, so all you need is an account from the service to grab it.

Aside from the poorly received storyline involving the vigilante hacker Aiden Peirce, Watch Dogs' gameplay, especially the hacking and multiplayer aspects of it, was praised by critics. You have the opportunity to claim the game and keep it in your Uplay library forever by grabbing it before 9:00am UTC on November 14. 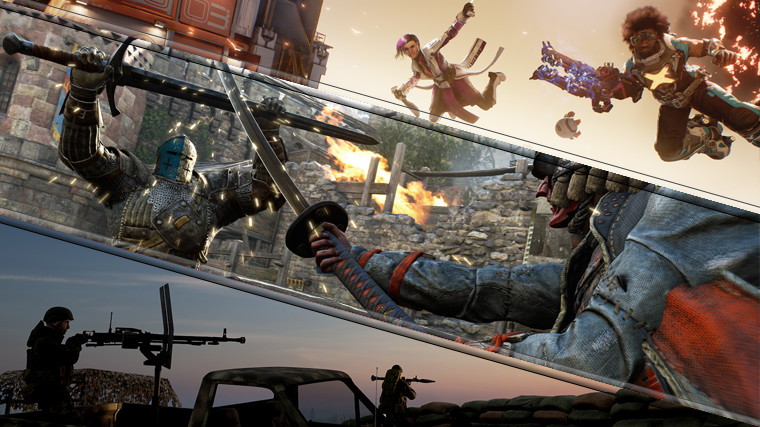 Ubisoft's multiplayer fighting game, For Honor, is receiving its fourth season of content next week, but right before that, the game is having a free weekend on both Uplay and Steam. While the free weekend is active you will be able to access the game's, albeit short, single-player mode and its entire multiplayer portfolio.

Also having a free weekend on Steam is Squad, the tactical shooter by the developers of popular Battlefield 2 mod, Project Reality. The early access title pits a hundred players against each other in various realistic combined-arms combat settings where most of the time, teamwork and communication trump quick reactions.

Finishing off the free weekend games is Lawbreakers for those who prefer a more fast-paced approach to shooters. Even with positive reviews at launch, the arena shooter has had an almost non-existent player base on PC, but the free weekend will hopefully populate the servers with enough new players to find some matches.

Be sure to apply the code FANATICAL10 when purchasing games from the new Fanatical store for an additional 10% discount. Some games may be priced slightly lower at other stores, but applying the code in Fanatical should give you the lowest possible price for them.

Now, with all those pesky DRM-filled games out of the way, let's take look at some DRM-free deals. The GOG store is hosting its usual weekly deals featuring games from Strategy First and 1C, as well as a special Made in Poland Sale celebrating the store's digital arrival to Poland.

Moreover, if you're quick you could probably grab a free copy of Syberia from GOG. The promotion still has a few hours left on it at the time of publishing this feature.