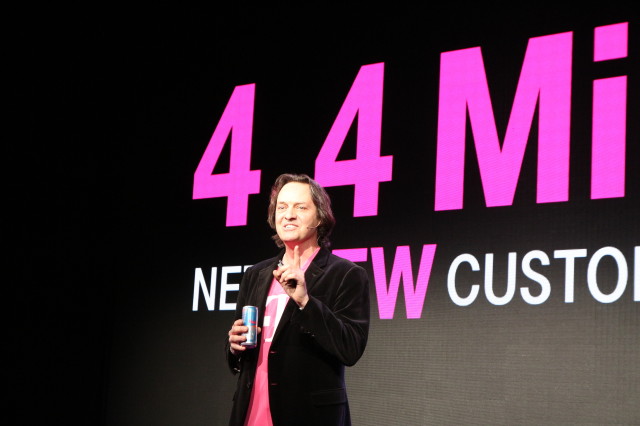 On July 1st, it was reported that the FTC had filed a lawsuit against T-Mobile accusing the company of cramming false charges into its customers' bills, a process which has allegedly earned them “hundreds of millions of dollars.” According to the suit, the practices took place from 2009 to 2013, and included fees from horoscope and celebrity gossip texting services, which many customers didn't even order. Now, the FTC wants T-Mobile to pay restitution to its customers for the years of false billings -- and unsurprisingly, the company is fighting it tooth and nail.

T-Mobile CEO John Legere was appointed in late 2012, and since then the company has taken a radical new direction. Once a tiny competitor to industry giants like Verizon and AT&T, Legere revitalized not only T-Mobile's business practices but their public image as well; branding the provider as an outspoken advocate for consumer rights, and even sticking the company's neck out with its ‘Un-carrier' plan, which, amongst other things, dropped contracts, overage fees, and even early termination fees. The revamp earned T-Mobile significant praise, and for some, even put the company in the running as a direct competitor to larger service providers.

But T-Mobile's response to the FTC's filing was absent of the goodwill which they had shown the world in the past year. Legere issued a statement to the FTC suit -- which, again, only wants T-Mobile to pay back the money it had fraudulently charged -- calling the filing “sensationalized,” as well as “unfounded and without merit.” The full statement does little more than deflect the claims, instead choosing to target other service providers and boast T-Mobile's “commitment to consumers” which it has worked so hard to develop.

T-Mobile is fighting harder than any of the carriers to change the way the wireless industry operates and we are disappointed that the FTC has chosen to file this action against the most pro-consumer company in the industry rather than the real bad actors.

Legere's response was little more than adolescent whataboutism, something you might expect a small child to say after he was caught by his parents doing something he shouldn't have. “But those other companies did it too! Why am I being punished?” Instead of taking responsibility and owning up to the fraudulent charges, Legere and T-Mobile decided to redirect blame. The tactic is laughably transparent, and in the long run it will bring the company a tremendous amount of trouble -- far more so than if they actually owned up to their actions. The entire ‘Un-carrier' name they've built over the past year? The suit might not destroy it entirely, but it will undo a great deal of the work Legere and T-Mobile have put in.

It's hard to stop the train of bad press now, but T-Mobile can still rectify it. The alleged billing policy happened from 2009 to 2013, and Legere only became CEO in late 2012. That means it was put in place by his predecessor, far before the ‘Un-carrier' was even imagined, and far before T-Mobile had reinvented themselves as a pro-consumer company. Legere could easily take responsibility while still distancing himself and his company from the practice. A simple acknowledgement would easily do the trick -- then a reference to T-Mobile's commitment to progress, and to making things right with the customer. The non-specific “hundreds of millions of dollars” claimed by the FTC to be owed would seemingly make a large dent in T-Mobile's funds, but that number shrinks in significance considering how much the company has grown in 2013 alone: 4.4 million new customers, and a revenue of $24.42 billion. With a savvy legal team, the potential restitutions could be argued down even more. And the goodwill provided by a proactive move to make things right? Innumerable.

As it stands, T-Mobile's corporate spewings are still very distant from the image they've built on the public end of business. While they may say that they're pro-consumer, the company is still like any other telecommunications giant at its core. But Legere and the rest of the corporate team can change that with a few simple actions, and launch a pro-consumer track record that supports all the hype they've created on the frontend.