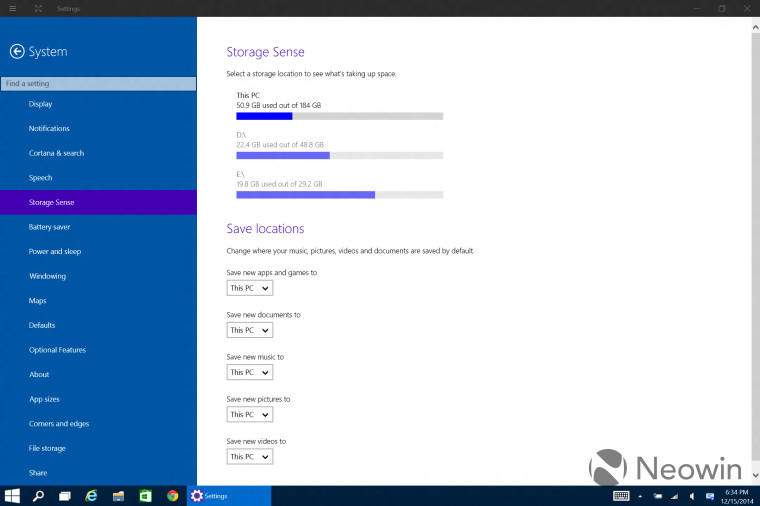 Over the weekend, an internal build of Windows 10 leaked that shows significant updates to the user interface including a new theme for the desktop. One of the features that has been updated in this build is Storage Sense and it provides a few hints about what to expect with the final release of the OS.

Microsoft has added new 'save location' settings to Storage Sense that, as the name implies, allow you to set default locations to save media. While there are the standard settings you would expect like default locations for music, pictures and documents, there is also the ability to set the default save location for apps and games.

This setting implies that Microsoft is going to make it possible to save content from the Windows Store to another location other than the internal hard drive; such as an SD card. This is a welcomed new feature as it makes budget friendly devices more flexible as most of them come with SD card slots that make it easy to expand storage.

Considering that these storage cards are so affordable, it makes 'upgrading' low-end devices quite easy.

Right now, in 9901, you cannot select a new location for any of the settings you see in the image at the top of this post. The drop-down menus are there but need to be populated with the storage location options.

Microsoft is holding an event on January 21st to talk about the next chapter of Windows 10 and Neowin will be there to cover all the news as it is announced.