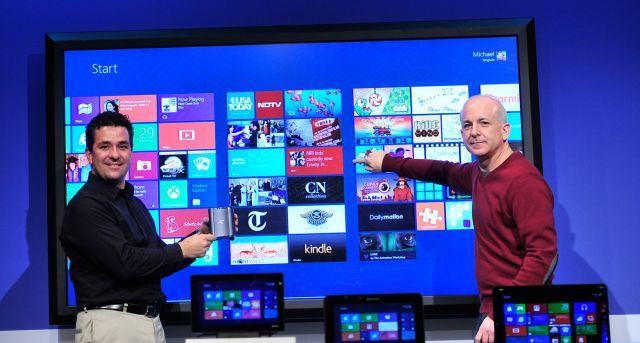 When Steven Sinofsky demoed the Windows 8 Consumer Preview build earlier today at the Mobile World Congress launch event, he showed off Windows 8's features on a huge 82 inch screen. Not only that, but the screen was fully touch supported for Windows 8's Metro interface.

It's a safe bet that very few people out there have an 82 inch TV screen in their home, much less one that has touch support. AllThingsD.com reports that the technology behind the screen was made by Perceptive Pixel. The company's web site has more information about that massive touch screen.

According to the site, the company's touch screen product is capable of "an unlimited number of simultaneous touches, so you can work independently or in a group setting." It claims the screen is so sensitive "that even a tap from a fingernail registers." The screen has been used by, among other companies, the CNN news network for their election coverage.

Perceptive Pixel offers up a number of other kinds of touch screen displays, including some "smaller" models that are 27 inches and 55 inches in size. There's no word on the pricing for the massive 82 inch model but we suspect that its one of those products that if you have to ask its price, you probably can't afford it.