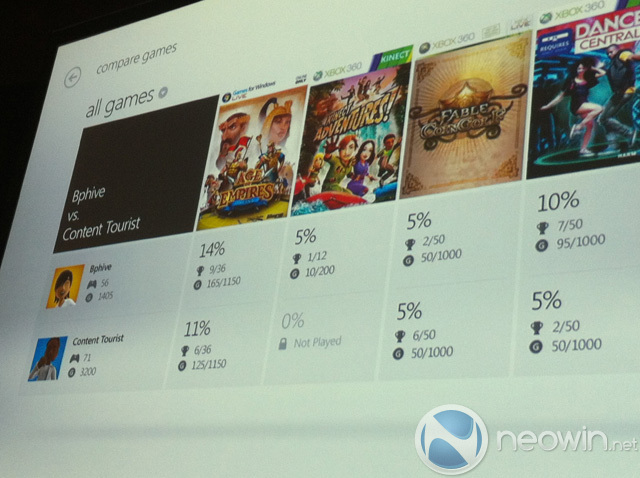 Today Microsoft dove into detail about the Xbox LIVE service integration with Windows 8. The addition of Xbox LIVE on Windows 8 will bring general and advanced gamers a similar experience as their console to the desktop.

Microsoft showed off some demonstration about how the Xbox LIVE integration works by showing off leaderboards, achievements and even full 60fps gameplay.

Microsoft is looking to give users a similar experience across all platforms for Xbox LIVE. Xbox 360 will receive a dashboard update later this year that will feature a new Metro-style layout. Xbox.com will also undergo a minor update to stretch the Xbox Metro theme across all platforms, even the web.

Games will be able to unlock achievements & gamerscore, get ranked on leaderboards, unlock avatar awards, use friends and community, set beacons and play multiplayer games with friends. Users will also be able to view profiles, friends gamerscore and even compare your games with your friends.

The biggest feature is that Microsoft is bringing Async to Windows 8, so users on the PC can play with other PC users, Windows Phone 7 users and even Xbox 360 users. The power of Async will connect gamers on all platforms, no matter where in the world you are.

If you've ever wanted to setup a game with friends, you can set up a ‘beacon' that will alert your friends that you will be playing a specific game at a specific time. This will help manage clan matches and connect you with friends.

Developers will have a sigh of relief knowing that Microsoft is introducing enhanced security measures with their Windows 8 games.  Pirated games will not be able to unlock achievements, use leaderboards, play online with friends or any other service that Xbox LIVE offers when a game has been detected as illegitimate.

Microsoft announced that there are currently 35 million subscribers on Xbox LIVE, with over 2.1 billion hours played per month - that is roughly 60 hours per user, per month. To date, users have unlocked 176 trillion gamer score, yes, trillion.

Windows 8 Xbox LIVE integration definitely has a lot of potential to become a huge success with not only advanced gamers, but tablet users who just want to play a simple card game.