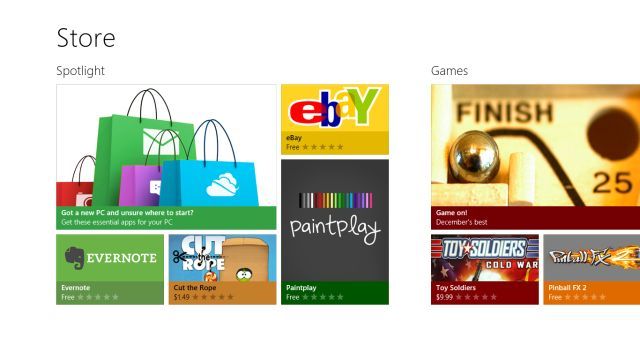 One of Windows 8's biggest new features, compared to previous versions of Microsoft's PC operating system, is the Windows Store section. The app download store will be part of the beta test of Windows 8 when it launches sometime in late February. In the newest post on the official Microsoft Store developer's blog, Microsoft's Jonathan Wang describes how the team is designing the Windows Store user interface to work well for its users.

The fundamental building block of our Store design was to ensure that people could easily discover and quickly acquire apps. While this is a somewhat obvious goal for a catalog or marketplace, it’s actually pretty challenging when the size and diversity of the catalog grows as quickly as we expect to happen in the Windows Store.

Microsoft wanted to put the emphasis on the Windows Store's content rather than do anything too fancy with the UI. Wang states:

On the Store landing page, we will continually feature new and exciting content, changing frequently so that customers come to expect there’s always more to explore within the Store. The landing page integrates featured content with navigational content (like categories and lists of featured apps). Research from our usability labs and from individual customer interviews indicated that people were more likely to just search for what they wanted in today’s app stores because most browsing experiences aren’t compelling enough. So we designed a landing page that integrates our featured content, data-driven lists, and category listings into one cohesive and engaging browsing experience.

Wang says that Microsoft will choose which apps to feature on the front of each category in the Windows Store. He states:

If there is a particular thematic element linking multiple apps we’d like to feature, we’ll create a special “topic” page that we link to from the landing page to showcase those apps. Customers will also be able to look at featured lists of the most popular apps, and what we consider to be the highest quality apps in each category. We’ll feature apps from ”rising star” developers that are building momentum, alongside those created by developers with an established track record of developing quality apps. Finally, we’ll also provide app recommendations based on the customer’s past purchase history. 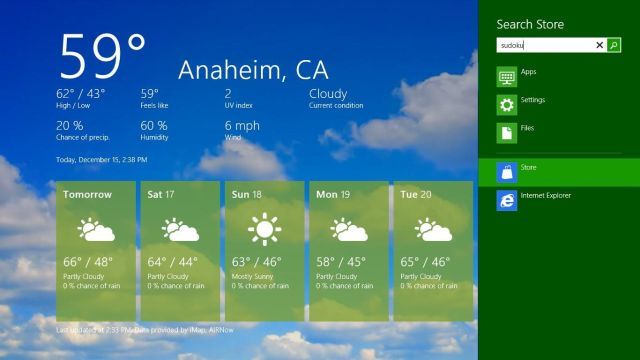 Once you begin typing, text suggestions will immediately appear in the search pane. This is a useful shortcut for most of us, but it’s especially useful when using a touch keyboard. If one of the text suggestions is an app, it will appear as a “Recommended” result, and tapping on it takes you directly to the app listing page—there’s no need to go to a search results page first, and so the fewest steps possible come between the customer and the app listing page. Even in the search recommendation, the app’s brand icon provides instant recognition. 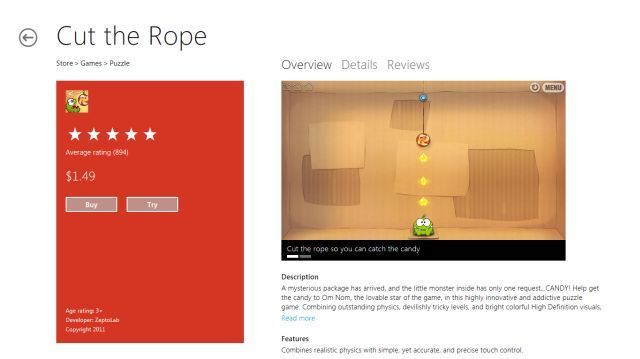 Once you find the app that you want to purchase and download, Microsoft has designed the interface to show information, screenshots and more features of the app, including of course its price point. People will also be able to rate each app via the interface. While the Windows Store is used for Windows 8 Metro-style apps, Microsoft has also designed a way for regular desktop apps to get some attention as well. Wang states:

Desktop apps that pass our Desktop App Certification can also have app listing pages. These will be discoverable in the Store via searching and browsing, and will include a link to the app developer’s website so that customers can purchase the app there.

Installing apps via the Windows Store should be less of a boring experience with Windows 8. Wang states:

Because we strongly believe in aiding app discovery, we’ve made a conscious decision that the customer shouldn’t be taken out of their context once they’ve started installing an app. We don’t believe you should have to stare at a progress bar and count every second as it goes by. Likewise, staying on the app listing page for the app you just acquired leaves you at a dead end with nothing to do. Instead, as soon as the installation starts, we take you back to the previous page you were looking at, so you can continue your shopping experience; in many cases, that’s the landing page, or a category page, or another list of great apps to try that you were previously looking at. Our lab research validated that people liked the continuity of getting one app and then going on to discover more.

Windows 8 will check once a day to see if there are any updates available for your installed apps and let you know what they are. The blog also reveals that users will be able to download the same app on up to five Windows 8-based PCs. Wang states:

We also allow you to quickly filter by the apps that have been installed on a particular device. This makes it easy to take the apps you have on one device and install them on another. In fact, if those apps have implemented roaming and you have a connected account (if you sign in to Windows 8 with a Windows Live ID), the settings and state from the individual apps will also be preserved across devices.