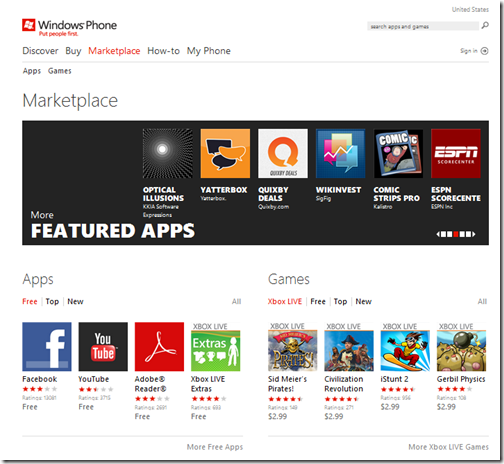 Microsoft is making a couple of changes for Windows Phone users who want to download apps from the Windows Store Marketplace. In a post on the official Windows Phone blog, Microsoft announced that it will remove the option to purchase Windows Phone apps with the Zune software. The post added that the Zune HD app store will remain open.

Microsoft said that most Windows Phone users purchase apps either from the Windows Phone Marketplace, which is embedded in all Windows Phone devices, or via the Marketplace web site. The post states, "As a general rule, we like to focus our engineering efforts where they matter most, and your taps and clicks tell us that’s our phone and web stores."

The other major change is that Microsoft will soon require that any Windows Phone user who buys, downloads or updates an app, or submits an app review, must update to Windows Phone 7.5 in the next few weeks to accomplish these tasks. The post states:

Why are we doing this? Marketplace is growing fast. It now has over 80,000 apps overall and is available in 54 (soon to be 63) countries around the world. Requiring Windows Phone 7.5 is part of an overall effort aimed at improving Marketplace performance and security, and paving the way for even faster growth and more new features.