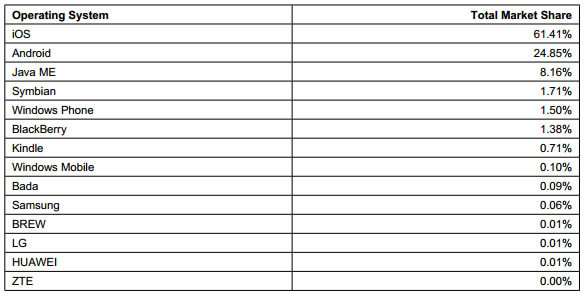 New data for March 2013 released by Net Applications shows that Windows Phone has finally overtaken BlackBerry in usage share, which now sits at 1.50%. Despite still trailing behind Apple's iOS (61.41%) and Google's Android (24.85%), climbing the market share ladder is always a positive step.

Even with the recent release of BlackBerry's "10" OS and the Z10 smartphone, it appears the company have not made a great enough impact to hold on to their lead over Windows Phone, despite reportedly shipping a million units in the first quarter of availability.

Looking back to February's data, Windows Phone held just a 1.24% share whilst BlackBerry held 1.39%. BlackBerry have not just lost the spot to Microsoft, but indeed dropped back 0.01% to just a 1.38% share. These numbers may seem negligible, but when a single percent can account for millions of devices, the significance is clear.

Most notably, Apple's iOS has increased its market share in March by 6.50%, whilst Android dropped 0.80%. These numbers do, however, only account for U.S. sales and do not take into account global market share of which Google holds the majority stake.

Given circulating rumors that Microsoft is creating their own "Surface Phone", Microsoft's 1.50% share could begin to rapidly increase. The news will likely come as a disappointment to BlackBerry, given that sales were faster than expected in February.